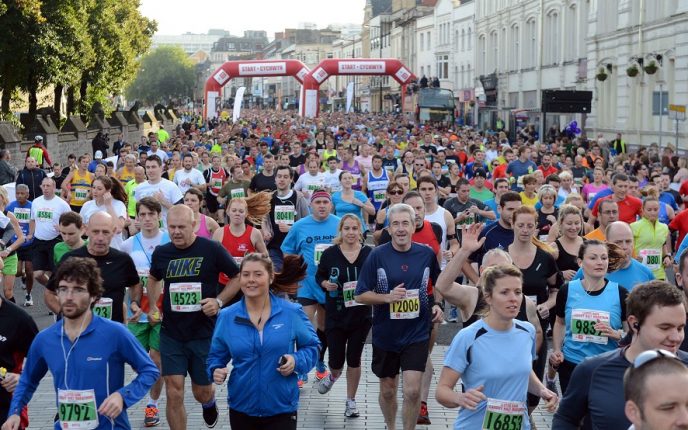 Inspired by 38,000 runners going through blood, sweat and tears to complete this year’s London Marathon? Then why not make the 2016 Cardiff University/Cardiff Half Marathon your next big challenge!

We have a free race entries and a brand new pair of top-of-range trainers from event partners Brooks Running UK to give away.

All you have to do is visit www.cardiffhalfmarathon.co.uk/london and enter your name and email address to be in with a chance of winning the fantastic prize.

The flat Cardiff course is perfect for beginners and seasoned competitors alike and with more than five months until race day on Sunday 2 October, there’s plenty of time to start training even if you have little or no previous running experience.

You’ll be running the same fast course that hosted the IAAF/Cardiff University World Half Marathon Championships last month, when hundreds of the world’s greatest distance runners including global superstar Mo Farah took to the streets of the Welsh capital.

Mo secured a bronze medal for Great Britain with a brilliant performance in Cardiff and was full of praise for the stunning 13.1 mile course.

With its iconic start line in front of Cardiff Castle the route takes in all of the city’s major landmarks including the Millennium Stadium, Cardiff Bay, the Senedd, the Wales Millennium Centre and Roath Park Lake before the grandstand finish in the Civic Centre.

A record 22,000 people signed up for last year’s Cardiff Half Marathon making it the second biggest (and we think the best!) half marathon in the UK.

Runners raised an incredible £2.4m for charity, ensuring its place as the largest fundraising mass participation event in Wales.

Even if you don’t get lucky in the competition, entry to this year’s event starts at just £25, which makes it the best value big city half marathon around.

You can save money by securing one of the early bird entries available until midnight on Saturday 30 April. Thousands of people have already bagged their place since registrations opened last month.