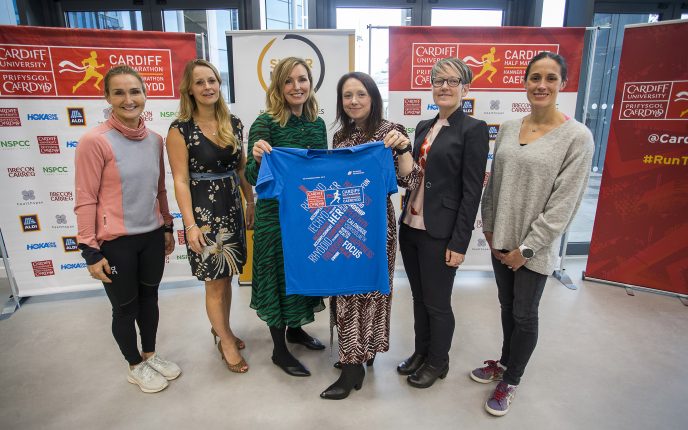 A group of inspiring females who have overcome their own barriers to run the Cardiff University/Cardiff Half Marathon kicked off race week in style at the #WhyWeRun media day.

Elite ultra-athlete and broadcaster Lowri Morgan hosted the event in Cardiff University’s new School of Journalism, Media and Culture. The #WhyWeRun campaign was launched to celebrate the rise in women’s running after a female majority made up Cardiff Half entrants for the first time.

Lowri, who has trained up 100 novice female runners to run the iconic 13.1 mile course alongside Women’s Health editor-in-chief Claire Sanderson, introduced a group of inspiring women to the media before the race’s 2019 finishers t-shirt was revealed.

Claire Sanderson has used running to combat her own mental health struggles after she was hospitalised twice during her ongoing battle with depression. Claire and Lowri will be supporting the Run Wales 100 every step of the way on Sunday, and both are relishing their return to the streets of the Welsh capital.

Lowri Morgan said: “I’ve worked at the Cardiff Half Marathon for a number of years, interviewing people as they cross that finish line, and no matter how hard the 13.1 miles have been on them they always have a smile on their face.

“It’s so inspiring to see every year and it has been a truly amazing experience listening to these women’s stories. Many face such a battle to get to the start line, but this campaign has helped give them a voice, and as long as they believe, they will make it to that finish line on Sunday.”

Claire Sanderson said: “I have lived away from Wales for more than 20 years and I can’t wait to come back and feel the atmosphere on Sunday in a city that has changed so much.

“I’ve suffered with low level depression since I was a teenager and have been hospitalised twice, but I find running and the right nutrition really suppresses the symptoms. It’s been amazing to hear the lady’s stories throughout this campaign and I’ll be in the middle of the celebrations after the race.”

Double ITU World Triathlon Champion and Team GB Olympian Helen Jenkins has been balancing motherhood with training for the last 20 weeks after the arrival of her second child, Max, in May.

Helen has a 50/50 chance of taking part on Sunday after suffering back problems training this week. But she was in attendance to talk about her Cardiff Half training journey and the adaptations she has had to make.

Helen Jenkins said: “It’s been a real journey getting back ready for the Cardiff Half all while looking after two young children, I’m not sure what I did before the kids because now it really is a full-time job.

“I’m hoping to run as part of my training to get back into competing at the elite level, but balancing motherhood with training has proved to be my biggest challenge yet.”

Helen James has undergone a transformation unlike anyone amongst the 27,500 Cardiff Half field. The Caerphilly runner lost 12 stone in 18 months after a course hypnotherapy gave her a new drive to get training.

Helen James said: “I managed to lose 12 stone in 18 months after hypnotherapy treatment and training at a gym. Before then I wouldn’t have imagined I could ever make it to the start-line. Not in my wildest dreams.

“I’ve watched friends complete the race but now I will be the one being supported along the way. It will be a fantastic experience to run the Cardiff Half alongside so many inspirational women.”

Title sponsors Cardiff University threw their support behind the #WhyWeRun campaign by launching a study into the barriers women still face to run. Sara Macbride-Stewart led the study and has explained her findings.

Sara Macbride-Stewart said: “What we’ve found is that women value the benefits of running to their fitness and mental health but sometimes feel they don’t have time to run because of work and family pressures.

“If valuable running and exercise time is what is lost between the squeeze from these commitments, then more might need to be done societally to ensure that exercise time is valued and prioritised. This could include ensuring that women have good places to run that are accessible and do not present an additional barrier to running.

“I will be running this year. Cardiff was my first half marathon and it’s fantastic to have Cardiff University represented as title sponsor of this iconic event for the city.”

Wendy Tarplee-Morris from children’s charity Little Princess Trust was also in attendance. The charity setup in her daughter’s memory provide real hair wigs for children and young people with with loss, and they also fund vital research into childhood cancer.