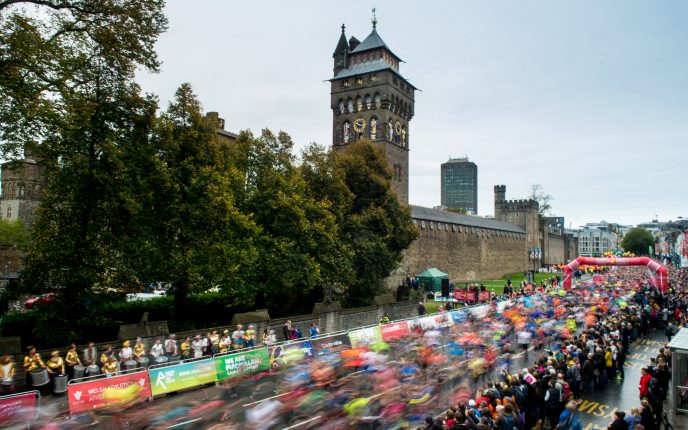 What’s changed in 15 years of the Cardiff Half?

In 2003, 1,500 runners lined up to take on the first edition of the Cardiff Half Marathon. In 2018, the race has sold out in record time and will be hosting the inaugural Commonwealth Half Marathon Championships. 25,000 runners will flock to the streets of the Welsh capital for what has become Wales’ largest mass participation event and the UK’s 2nd largest half marathon.

So, what’s changed over those 15 years? Cardiff and Wales in general has become a hub of sporting excellence in those years, hosting major sporting competitions not only including the IAAF World Half Marathon Championships in 2016, but the UEFA Champions League Final, Ryder Cup, an Ashes Test Match, Rugby World Cup games, stages of the Tour of Britain, Anthony Joshua bouts and much more. Cardiff is no longer a stranger to mass-participation and box office events, so it’s no wonder the race has seen such rapid growth since 2003.

What about some of the best athletes to grace Cardiff? The UK’s most successful distance runner, Mo Farah, who took on the IAAF World Half Marathon Championships in Cardiff in 2016, was just 20 years old in 2003 and yet to make any significant inroads into his senior career. In 15 years, he’s won a huge 10 World and Olympic gold medals. Dewi Griffiths, who has enjoyed plenty of success at the Cardiff Half, was at U13 level in 2003! Cardiff legend and Tour De France victor Geraint Thomas was just 17 and would go on to win his first European track medal a year later. Fellow Whitchurch High pupils Gareth Bale and Sam Warburton were still in their early teens in 2003, before forging careers as two of the best in their business, earning Champions League and British Lions glory respectively!

People are running more than in 2003, too! It’s safe to say the running bug has bitten and that success likely falls at the feet of parkrun. Founded in 2004 when just 13 runners took on 5K in Bushy Park, Teddington, the weekly event has grown globally. It came to Wales and Cardiff in 2008 and celebrated its 10th anniversary in style last February with a record of nearly 1,200 runners taking part – making it the second largest parkrun in the UK.

Run 4 Wales, the event organisers behind the Cardiff Half Marathon, formed in 2012, taking over the race from founder Barnardo’s before growing the event to exciting new heights including the staging of the IAAF World Half Marathon Championships in 2016.

Not only do 25,000 sign-up to run, but the number of people who line the streets of Cardiff to spectate is almost double that figure! In just 15 years, running has grown from a hobby for the few to an integral part of so many people’s lifestyles – with the legacy of the London 2012 Olympic Games in part helping to drive people to get fit and maintain healthy lifestyles. We predict those numbers will just keep rising!

The social side of running has and is continuing to grow as running fever shows no sign of slowing up. You need not look further than the advances in technology and how they’re influencing the behaviour and habits of the everyday runner. Since the first Cardiff Half Marathon in 2003 we’ve seen the introduction of the likes of Strava and Nike+ apps which equip runners with the ability to track their progress and interact with friends. As social media grows, so does the sport. We just love to let others know how we’re getting on – and others love to see how we’re getting on! There’s trainer ‘technology’, too. Gone are the days of flat shoes and glove-fit trainers. Since 2003 and the dawn of the Cardiff Half Marathon, trainers have come on leaps and bounds – with a current preference for light, ‘minimalist’ shoes which mimic the real motion of the foot. There’s GPS watches that can monitor our steps per day, detailed gait analysis, scientifically proven training supplements and a world of apps for basically anything you want – all things that just weren’t around back in 2003. The world of running is bigger than anyone could imagine. 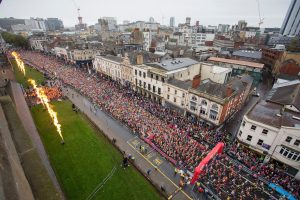 And then there’s the devoted Cardiff Half runners, without whom we’d be nowhere. Andrew Roach, who has run the Cardiff Half Marathon every year since 2003, said: ‘Having seen the event grow from a few thousand people to 25,000 has been amazing. I have always found the race to be very friendly and everyone seems to be willing to help each other get over the finish line.

The one thing that does stick in my memory is the years when the finish was in the Millennium Stadium and there was something a bit special about doing a final lap of the stadium will the crowds cheering you on.’

Stuart Duff, another to have taken on almost every Cardiff Half since its humble beginnings, realised what an impact running had on managing his stress and keeping himself healthy. He said: ‘I trained hard along the Taff and through the parks and set myself the goal of running it in under two hours.

On the day I still remember finishing with the horrific slippy cobbles in the grounds of the castle (you had to tip-toe over them) followed by a couple of laps of the Millennium stadium with family and friends all cheering. It was amazing.’

It turns out a lot has happened in 15 years, but the Cardiff Half Marathon has remained a constant. Thank you to all our runners who have taken part and here’s to the next 15 years!