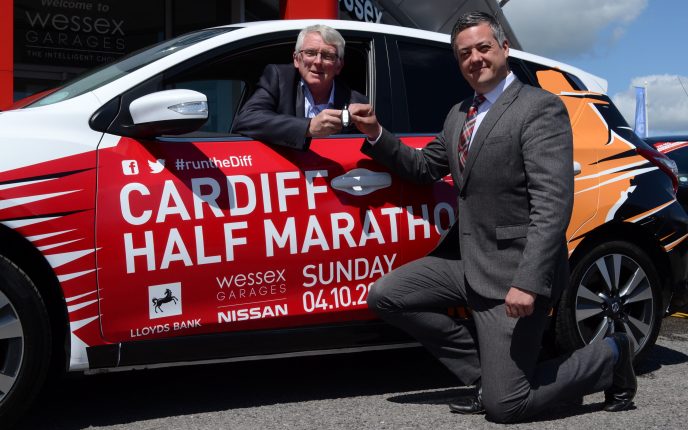 A Car dealership in Cardiff has this month (June, 2015) signed up to support the Lloyds Bank Cardiff Half Marathon for the third year in a row.

Wessex Garages on Hadfield Road will be the official vehicle sponsor for the event, which takes place on Sunday, October 4.

Gareth Howells, General Manager at the dealership, explained: “The Lloyds Bank Cardiff Half Marathon is a fantastic event and we are pleased that we could be its official vehicle sponsor for the third consecutive year.

“We are always keen to support local sports events whenever we can as they really bring the city together.

“As part of our backing for the event we have supplied a Nissan Pulsar to Run 4 Wales, which is organising the race. It has been branded with information about the half marathon and will be used to help promote it.

“The vehicle will also be used for the actual event to lead the race for the runners.”

The route will take people around some of Cardiff’s iconic landmarks. The predominately flat and fast course makes it ideal for beginners and elites.

The race starts outside Cardiff Castle and runners then head down past Cardiff City Stadium on the way to Penarth. They take in the Penarth Marina before crossing the barrage and heading to Cardiff Bay. Runners run right through the heart of the bay taking in the Norwegian Church and Wales Millennium Centre.

The course then heads towards the north of the city and runners will complete a loop of the Roath Park Lake before the grandstand finish on North Road outside the Royal Welsh College of Music and Drama.

“Our new promotional vehicle, the bright and colourful Nissan Pulsar, will be an eye-catching reminder to runners that there’s still time to register for this year’s Lloyds Bank Cardiff Half Marathon.”

To find out more about the Lloyds Bank Cardiff Half Marathon, which take place on Sunday, October 4, or to register for the race, please visit www.cardiffhalfmarathon.co.uk. Registration closes on September 1, 2015.

Wessex Garages is a privately owned company that has outlets in Bristol, Cardiff, Gloucester and Newport. It specialises in new and used car sales across South Wales and the South West.