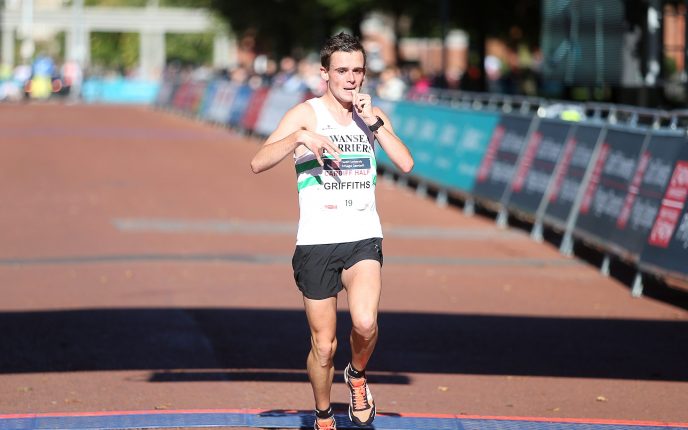 Wales took centre stage at last weekend’s London Marathon as entries continue to flood in for this year’s Cardiff University/Cardiff Half Marathon.

More than 500 inspired runners signed up over the weekend after watching a record 39,487 runners cross the finish line in London.

Josh Griffiths is the talk of British athletics this week after the Swansea Harrier ran his way into the World Championships and the Commonwealth Games with a brilliant marathon debut in London. The 23-year-old, who is currently studying for a masters degree in sports coaching at Cardiff Metropolitan University, clocked 2 hours, 14 minutes, 49 seconds to end up as the fastest British athlete on the day in a time that earned his 13th place overall.

He said: “I wasn’t expecting  this, this is all very new to me. The goal was to try and qualify for the Commonwealth Games team for Wales, so to actually qualify for the World Championships in the summer is still sinking in.

“It means so much because training is hard and for it to pay off like this – I still can’t quite believe it. I didn’t really realise until I crossed the finish line what I had just done.”

But it was another Swansea Harrier, Matt Rees, who stole the show on The Mall. The selfless Welshman sacrificed his own race to help physically exhausted fellow David Wyers across the finishing line.

The legs of Chorlton Runners athlete Wyers began to buckle during mile 26, but Rees was on-hand to lend a hand and help carry his fellow competitor to the finish at the cost of his own personal best. In a return act of kindness, Chorlton Runners have pledged to pay for Rees’s 2018 London Marathon entry, but he says anyone else would have done the same.

He said: “I just helped a guy out when he was in need. I’m glad he got to the line, and I’m glad he is okay. That spirit, it encompasses what running is about and what the marathon is about.

“I came round the final corner and I saw a runner struggling, his legs were collapsing beneath him. Every time he tried to get up, he kept on falling back to the ground. “I said ‘come on – we can do this – we’ll do it together, we’ll cross the line together.”

There was more good news on the women’s side with big personal bests for the top two Welsh athletes. Rosie Edwards ran 4 mins, 15 sec faster than ever before to finish in 2:40.49, some 70 seconds outside the Commonwealth Games ‘B’ Standard.

The 2016 race sold out in just six months and attracted a record 22,000 runners, but interest in the 2017 race has been higher than ever – with organisers expecting a sell-out 24,000 runners at the iconic Cardiff Castle start line on Sunday 1st October.

Sign up at www.cardiffhalfmarathon.co.uk/register to make sure you don’t miss out on what promises to be another day to remember in the Welsh capital.