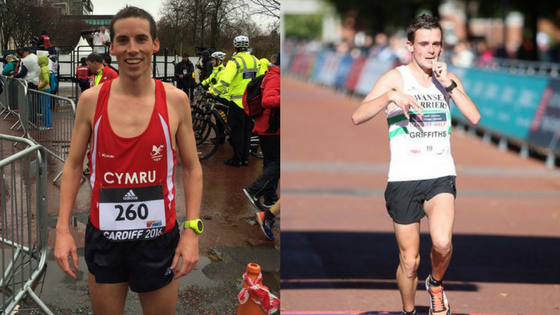 Sunday morning will see them join Scotland’s Callum Hawkins in taking on the best athletes in the world on the streets of London in a battle for medals at the World Athletics Championships. For the dynamic Welsh duo it will be a return to the scene of their greatest performances.

Both men qualified for the British team, and posted qualifying marks for next year’s Commonwealth Games, with their outstanding runs in the London Marathon. Griffiths made a stunning marathon debut to come home as the first Brit in 13th place in 2:14.49, while Davies was four places behind in 2:15.11.

“It was a shock to me and a lot of other people when I ran 2:14 in London and beat all the guys I did. It was a bit of a dream start for my marathon career,” admitted Griffiths.

“It took a couple of weeks to sink in, but then I had to get stuck into my training for this weekend. I train alone, but I like that, and because I’ve got a Masters degree in coaching, and I read a lot, I’m happy coaching myself.

“This weekend’s marathon is just another race and I haven’t changed too much in my training. A lot of people try to make it more complicated than it is.

“If you aren’t training hard you aren’t going to make it and both Andy and I train hard. I would never have thought I’d finish 13th in the London Marathon, so I will be setting my sights high.”

Regular ice baths have been a feature of his build up to the big day in an attempt to take the bruising and tiredness out of his legs. At temperatures of -3 degrees he admits that some of his post training dips “have been the hardest sessions I do.”

A British mountain running international and Welsh Commonwealth Games marathon runner in Glows in 2014, Andrew, is very much the veteran among the British trio at 37. He took up running after playing at a high level in semi-professional football and will be taking part in his 16th marathon.

“I don’t like the limelight and it was great that Josh got it all after the London Marathon. That allowed me to just get on with things,” said Andrew, who runs with his Jack Russell terrier, Scraps, as a training partner.

“I run up in the hills and on the canal path – the fell running makes my legs strong and makes you mentally tough. Scraps comes out in the morning and afternoon with me, although she goes a maximum of five miles.

“I still don’t realise how big it is going to be, but it’s a good feeling. It’s brilliant having two Welshmen at the World Championships and I hope we can work together and come good on the day.”

They will be following in the footsteps of fellow Welshmen Steve Jones (1993) and Dale Rixon (1997) in competing in the marathon at the Word Championships. Jones posted the best performance by finishing 13th in 2:20.04 in Stuttgart.

In 21 performances at the 15 previous championships the best British performance is Peter Whitehead’s fourth place in Gothenburg in 1995. Hugh Jones came closest to winning a medal in terms of time with his fifth place in 1987, a mere 14 seconds off a bronze in Rome in 1987.

It is a tale of woe that has been mirrored at the Olympic Games and European Championships down the years. Charlie Spedding was the last Briton to win a medal at the Olympic Games, a bronze in Los Angeles in 1984, with another 10 year gap back to Ian Thompson’s gold in Rome in 1974 at the Europeans before that.

There are 108 of the world’s best athletes from 54 nations entered in the race with Kenya’s Daniel Wanjiru (2:05:21 pb), this year’s London Marathon winner, the favourite.

The World Championship Marathons start and finish at Tower Bridge (Men’s start is 10.55am and the Women’s race goes off at 2.00pm). The loop course will take four laps of a 10km course on closed roads, heading west along Victoria Embankment towards the Houses of Parliament, then back alongside the edge of the River Thames to St Paul’s Cathedral before returning via the Tower of London.