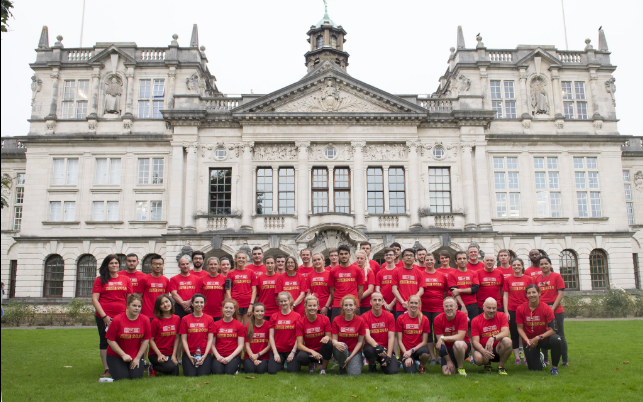 Staff and students are preparing for a weekend of running-related activities as part of our partnership with the Cardiff University/Cardiff Half Marathon.

A day-long Festival of Running offering fun for all ages takes place on Saturday, 1 October ahead of the half marathon itself the following day.

The festival includes a fun run for Cardiff University students, a mascot race featuring our very own Dylan the Dragon and a family fun run.

The students’ fun run will see competitors complete a 2.4km route taking in the Civic Centre, Alexandra Gardens and North Road.
The main event on Sunday morning features staff, students and alumni running as part of the University’s 200-strong #TeamCardiff or volunteering in important roles to support the event.

#TeamCardiff runners have pledged to raise funds for the University’s cancer research or dementia and mental health research.

Meanwhile, physiotherapists from our School of Healthcare Sciences will be available to offer a massage to weary runners in a marquee in the runners’ village outside City Hall.
The University will also have its own marquee hosting a range of activities for all ages across the weekend.
Professor Colin Riordan, Vice-Chancellor of the University, said: “The Cardiff Half Marathon is a highlight of the city’s sporting calendar and is now established as one of the most popular half marathons in the UK.

“Public health is a major part of the University’s work so our involvement with the event is a valuable way of promoting the benefits of a healthy, active lifestyle.

“Good luck to everyone taking part in activities across the weekend, particularly the University’s runners and volunteers.”

Professor Riordan will be starting the first wave of runners at 10:00 on Sunday.

The race, which is being shown live on BBC One Wales with further coverage on BBC Radio Wales and BBC Radio Cymru, features a record number of entries this year after all 22,000 places sold out in advance.
More than 16,000 runners finished the race in 2015, making it the second biggest half marathon in the UK behind the Great North Run.
Our partnership with the Cardiff Half builds upon our support of the IAAF World Half Marathon in Cardiff earlier this year in which thousands of runners followed in the footsteps of 200 elite athletes, including double Olympic champion Mo Farah.