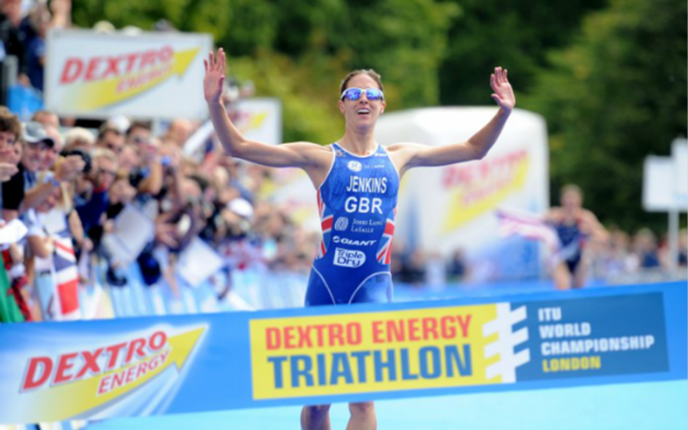 Most mothers will spend every waking hour doting over their new child three months after giving birth.

But double world triathlon champion Helen Jenkins is finding the time to ramp up her training for this year’s Cardiff University/Cardiff Half Marathon.

The Welsh Olympian from Bridgend and her husband Marc welcomed Max Edward Jenkins into the world on Sunday 19 May, exactly 20 weeks before Wales’ largest mass-participation event returns to the capital.

She conquered the world in Vancouver in 2008 and repeated the feat in Beijing three years later, but raising her young family has proved to be one of her biggest challenges.

Life can be difficult enough with two young children to keep an eye on without having to squeeze in training runs with race day on October 6th fast approaching. But for Helen, she finds her time clears her head of all the pressures and worries that come with motherhood.

“I’m getting back into it now and training is going ok. I got an email from the Cardiff Half Marathon saying the race was only 10 weeks away which gave me a bit of a wakeup call,” she said.

“I’m lucky, I’ve got great support from my husband and the kids have got fantastic grandparents too, which allows me the time to get out and train. I’ve been really enjoying training again.

“It’s that thing which is just for me, away from being a mum because you can’t just be mum all the time.

“It’s been a real struggle to get training during this pregnancy, compared to my first one. We had a scare at 16 weeks into the pregnancy which made me take a step back and put the baby first. But getting back into it has been lovely.”

An uncomfortable feeling of guilt washes over many new mums whenever they leave their children in the care of loved ones. Mum guilt affects more than 90 percent of mothers, but Jenkins has learned to live with the inevitable separation anxiety.

“The mum guilt doesn’t go away, I found it really hard the first time around as I was trying to train a lot and get back in a position to compete,” she said.

“But this time around I’ve done it at my own pace, often I train when the kids have gone to bed which has been nice because it’s my own time.

“Dealing with that sense of guilt is tough, but sometimes it’s better to go out and leave them with Marc for a bit, because they appreciate you more when you come back and it just gives you that time on your own that you need.

“It’s just about getting that balance right which I feel like I’ve done better this time with Max.”

Jenkins is used to competing with the best athletes from across the world during her stellar triathlon career. This year though she will join the 27,500 mass runners on the start line outside Cardiff Castle. And she is ready to drink in the festival atmosphere created by the participants and heir raucous supporters along the iconic 13.1 mile route.

“I just want to get around the course to get myself back into it, that’s my main motivation. I’ve always wanted to do a mass-participation event but because I’ve been elite racing for so long, I’ve never got the chance to take part in one with all the other participants.

“I’ve never done anything like it before and it will be fantastic to have all the support and just enjoy every moment of it.

“I would love to get back to doing the shorter distance triathlons, but even if I can’t I will still go back and do the longer ones which include a half marathon, so the Cardiff Half will be an important milestone in my training. But most of all it’s an opportunity to get back out there and enjoy an event with everyone else.”

I love running, it’s my escape. I love it even more now because injury and pregnancy has stopped me running for periods in the past. It just gives me a sense of freedom when I’m out on the training. Being outdoors and connecting with nature is another reason why I run, you just can’t beat it.