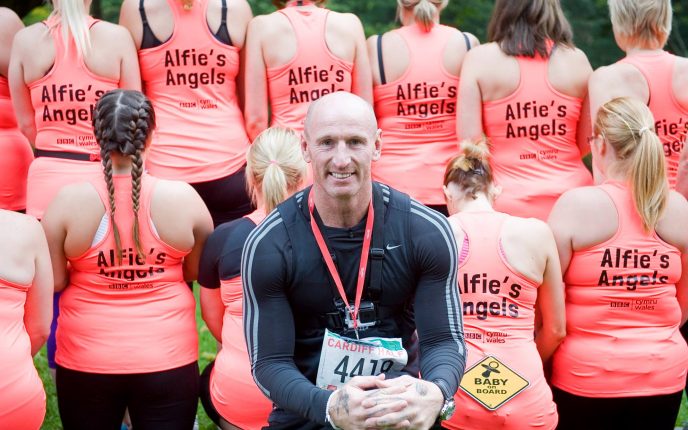 Welsh rugby legend Gareth ‘Alfie’ Thomas is on the lookout for a super-sized group of ‘Alfie’s Angels’ to take part in October’s Cardiff University/Cardiff Half Marathon.

After the success of last year’s Alfie’s Angels – when Thomas coached 16 women from the village of Deri to complete the Cardiff Half Marathon – the former rugby star is returning for a second series of the BBC Wales programme Run For Your Life.

This year Thomas will train 100 ‘Angels’, both men and women, to complete the iconic 13.1m course around the capital, which was used for the prestigious IAAF/Cardiff University World Half Marathon Championships in March.

Those chosen to be part of ‘Alfie’s Angels’ will be given a free place in this year’s race on Sunday 2 October plus goodies from event sponsors including Arriva Trains Wales, Brooks Running UK and Brecon Carreg.

Once again the programme will focus on people who have never run a half marathon before but want to use the race to kick-start a healthier lifestyle.

Gareth Thomas said: “Last year I took 16 totally unfit women from Deri and put them through 16 weeks of hell.

“There were plenty of tears and laughs along the way but in the end they all crossed the finish line of the Cardiff Half Marathon.

“It was a life changing experience for them and me and I’m ready to do it all again.

“This time I’m going to super-size it, I’m looking for 100 people, so if anyone thinks this could be for them all they have to do is get into a group of five and get in touch.”

To apply to be one of the lucky 100, visit www.alfiesangels.com.

The 100 free spaces worth £3,700 have been donated by Cardiff University/Cardiff Half Marathon organisers Run 4 Wales.

Run 4 Wales chief executive Matt Newman said: “We are committed to using the Cardiff Half Marathon as a vehicle to promote better health and physical well-being to the nation and we are delighted to have Alfie and his Angels involved again.

“Not only was last year’s programme great fun but it also proved that with the right training and dedication anyone can complete the Cardiff Half Marathon.

“Everyone should experience the incredible atmosphere of the Cardiff Half Marathon at least once and by joining Alfie’s Angels you could change your life forever. We look forward to seeing the 100 lucky participants at this year’s event.”

More than 9,000 people have already snapped-up places since entries went on sale in March– making it the fastest-selling Cardiff Half Marathon to date.

Interest in the event has grown substantially since Cardiff hosted the IAAF/Cardiff University World Half Marathon Championships last month.

Runners from across Europe have signed up to run the same flat, fast and iconic course run by Mo Farah and Geoffrey Kamworor, who set an incredible new course record of 59:10.

The Cardiff course is perfect for beginners and seasoned competitors alike and with more than five months until race day on Sunday 2 October, there’s plenty of time to start training even if you have little or no previous running experience.

With its iconic startline in front of Cardiff Castle the route takes in all of the city’s major landmarks including the Millennium Stadium, Cardiff Bay, the Senedd, the Wales Millennium Centre and Roath Park Lake before the grandstand finish in the Civic Centre.

A record 22,000 people signed up for last year’s Cardiff Half Marathon making it the second biggest half marathon in the UK. Runners raised an incredible £2.4m for charity, ensuring its place as the largest fundraising mass participation event in Wales.

Entry to this year’s event starts at just £25, which makes it the best value big city half marathon around.