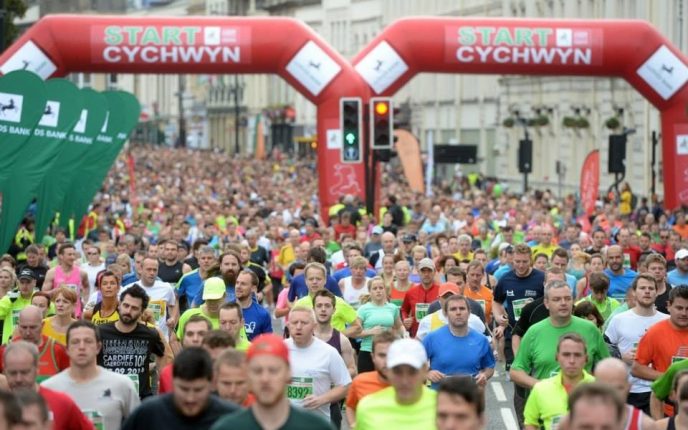 Two Cardiff University students and hockey enthusiasts ran the Cardiff Half Marathon as a special tribute to their friend who suffered a spinal injury which meant she could no longer play hockey with them.

Amy Hayes and Olivia Abbott, both 20, are keen players on Cardiff University Ladies Hockey 1stXI team and are fundraising for spinal charity Aspire, who helped their best friend get back into sports after a car accident.

Isobel Bailey, also 20, was studying English Literature at Exeter University and was chosen to play for the England mixed hockey team in June 2013. But just a week later, on June 23, Isobel was in a car accident on the way back from a trip to the cinema.

Her accident meant that she could no longer play hockey and Aspire stepped in to give Isobel her independence back.

Isobel said: “Aspire did a lot for me by mentoring me and educating me about spinal cord injuries.

“Aspire gives you your life back and they did a lot for me by getting me socialising and being independent again.

Aspire introduced Isobel to shooting, since she was only able to do passive sports at the time due to her broken ribs.

After rapidly improving at the sport, Isobel was offered a spot on the Great Britain shooting team and is aiming to go to Rio de Janeiro to participate in The Paralympic Games in 2016.

She said: “I know it will take a lot of hard work but I would love to go.”

Just over a year after Isobel’s accident, Amy and Olivia thought it would be a fitting tribute to their friend to run the Cardiff Half Marathon, since Isobel used to be a cross-country runner at their school.

Amy, a History student at Cardiff University, said: “I hate running unless I am running after a hockey ball.

She continued: “Isobel was a big cross-country runner so I thought it would be an appropriate gesture to her.”

She added: “Amy and I were hoping to run the race together and cross the finish line at the same time.”

Both girls have managed to raise £2,600 to give to Aspire, who are able to provide those with spinal injuries with specially adapted houses and grants to get them back into sports.