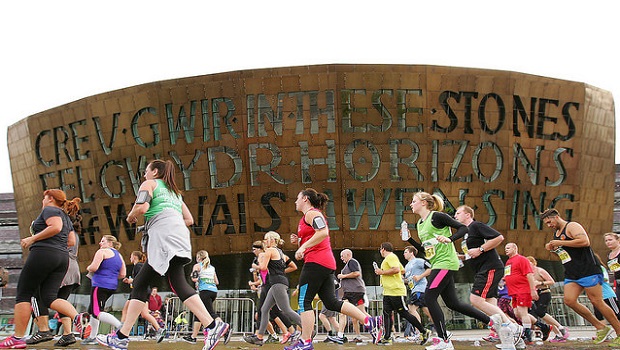 For Sarah Lane this year’s Lloyds Bank Cardiff Half Marathon is going to be a very special celebration.

Even though the 40-year-old twin managed to complete the 13.1 mile course last year, she is expecting an even bigger and warmer reception at the finish than 12 months ago.

There were family and friends at both the start and finish line to give her support, but one very special person was missing.

“When I ran last year I had not long recovered from having an emergency caesarean to deliver a baby girl for my twin sister, Alyson. It was a bit of a struggle because I hadn’t had much time to train, but this year will be different,” said Lane.

“My sister had been through four bouts of IVF, and suffered an ectopic pregnancy, and so I offered to act as a surrogate mother for her. When she agreed I felt so proud and this year when I run her daughter, Seren, will be there to cheer me on.

“That is going to make it even more special to be a part of this great race. I’ve run it a few times and I’ve been gearing up for next month by running in the Race for Life and the Cardiff 10k.”

Lane, who works at Asda’s Leckwith superstore, already has two children of her own, a 20-year-old son, Jarvis, and 12-year-old daughter, Cameron. But she spends one day a week looking after Seren, who she describes as “the centre of everybody’s world.”

“I’m dedicating my performance in this year’s Cardiff Half Marathon to Seren and my sister and I’m hoping to break the two hour mark,” added Lane. “I go to Fairwater Leisure Centre every week to train and I also make sure I put in two 5k runs as well.”