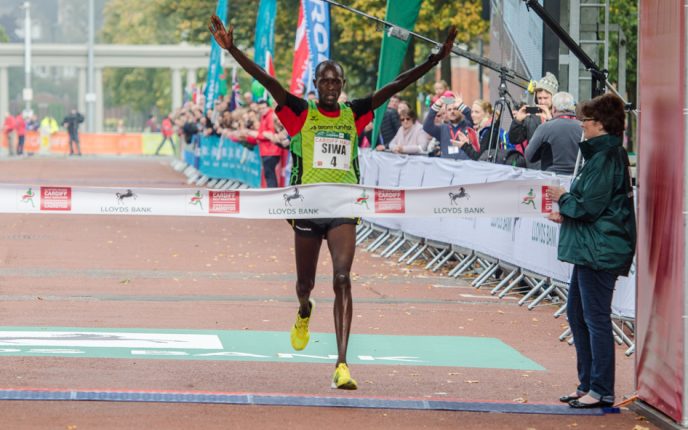 Uganda’s Ben Siwa stripped 12 seconds off his personal best to win the Lloyds Bank Cardiff Half Marathon – which had a record 16,000 finishers.

He went away from the rest of the field after an opening mile of 4:42 and clocked 62:07, 16 seconds off the race record set in 2013 by Kenya’s Lotarakwai Lengurisi.

After Griffiths led for most of the race, defending champion McLeod managed to haul him back in and retain his title in 64:19, with the Welshman picking up silver in 64:28. Both were within the British Athletics qualifying time of sub-65 minutes.

McLeod said: “I thought at five miles I was going to reel him in pretty quickly but it actually took me another seven miles before I caught him up.

“I was 24 seconds down at five miles and at that stage we were both running at the same pace. When I managed to push past him just after 12 miles it was a question of staying in front and not allowing him to close the gap.

“I came here to retain my British title and to win a place in the British team for next year’s World Half Marathon Championships, I am delighted to have achieved both of those goals and chopped 38 seconds off my PB.

“I’m really looking forward to coming back next year and it will be a great honour to run in a British vest.”

McLeod, son of former Olympic 10,000m silver medallist Mick McLeod will be heading with Griffiths to Boulder, Colorado, to train with former world marathon record holder Steve Jones ahead of next Easter’s event.

Griffiths spent three weeks with Jones ahead of this year’s Cardiff Half Marathon and has now recorded PBs over 10k and half marathon since returning.

His sixth place time of 64:28 stripped 33 seconds off his previous best and allowed him to crack the 65 minute qualifying barrier set by the British selectors.

Griffiths said: “I came here to try to run a good time and I gave it a real go from the start.

“Sometimes you feel good all the way through but other times it’s tough to keep it going and you can forget how far 13.1 miles is.

“I got locked in no-man’s land for quite a while and when I turned at nine miles I could see Ryan coming. I just didn’t have any more to give by the end.

“But I am happy to have got another PB and delighted to have made the British team. I can’t wait to be a part of the World Championships on home soil next year.”

In the women’s race, Kenya’s Lenah Jerotich just held on to win by a second from fellow countrywoman, Demaris Kemunto Arebain in 71:32. That gave the two Kenyans a small cushion of only a few seconds over British debutant Jess Coulson, who finished strongly in 71:36.

“I simply ran out of road in the end,” said Stockport Harrier and former European U23 Cross Country champion Coulson, who moved third on the UK half marathon rankings for 2015.

“I didn’t want to start off too fast but at about eight miles I decided I would try to pick off the girls in front of me.

“I had a great group of lads around me and they really helped. I had only ever run competitively up to 10 miles before but I didn’t struggle with the extra distance.

“I came here looking for a British vest and I am delighted to have clinched it. The support around the course was amazing and I am really looking forward to coming back here.”

Jenny Spink returned to Cardiff and came up with another fast time as she took silver in the British Championships to earn her ticket to next year’s World Championships.

Spink said: “I felt strong, I was in my better shape than last year and I was able to change pace more easily. The first mile was a bit too quick at 5:20 so I throttled back a bit and it was great to come up with a big PB and get a chance to win my first British vest.

“I am making my England debut in the Toronto Marathon later this month and I’ve got my sights set on having a crack at getting into the Olympic team for next year.”