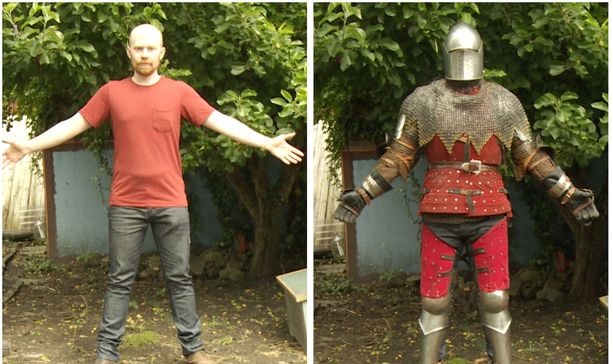 Thousands of runners are set to do battle with this year’s Cardiff University/Cardiff Half Marathon – but only one will be wearing a full suit of armour!

Tudor Jones, nicknamed ‘Sir Runalot’ will be attempting to set a new Guinness World Record for the fastest half marathon wearing a suit of armour at Wales’ biggest mass participation race on Sunday 2 October.

The steel suit weighs a whopping 30kg – almost half of Mr. Jones’ bodyweight – and he will need to complete the grueling 13.1-mile race in less than three and a half hours in order to set a world record.

Mr. Jones commented: “Training has been challenging, exhausting and painful!

“The problem is the heat from the padding, which is a nightmare after the first hour. Dehydration is the main challenge to face, not the distance.

“I’m now working as a labourer as well and so the training has gotten harder to fit around life.”

The 27-year-old hopes to use the world record attempt to raise £1,000 for the Ty Hafan and Mencap charities and he has been training hard for race day.

He added: “I’ve always been into history and already had a full suit of armour. I had a bit of free time so I thought, why not?

“A friend who works with one of the charities I’ve chosen suggested doing it for charity then a friend dropped the idea of a world record attempt and then it just snowballed from there. Now here we are!”

Mr Jones is one of more than 17,000 runners who have already signed-up for this year’s Cardiff University/Cardiff Half Marathon on Sunday 2 October.

He’ll be fundraising for Ty Hafan and Mencap, and his fundraising links can be seen below:

Get your place in the Cardiff University/Cardiff Half Marathon from just £25 by visiting www.cardiffhalfmarathon.co.uk/register/ and get involved in the conversation using the hashtag #RunTheDiff on Twitter.