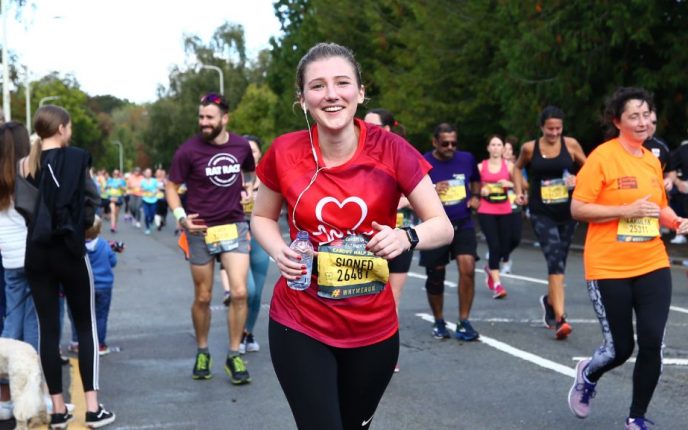 Sioned running to keep families together

Sioned from Caerleon ran her first ever half marathon when she signed up to the Cardiff Half Marathon in 2019. She chose to run for the British Heart Foundation after her dad Grahaeme tragically died of a cardiac arrest earlier that same year.  The family discovered after his death that Grahaeme had an undiagnosed inherited heart condition called hypertrophic cardiomyopathy (HCM). It’s estimated that around 30,000 people in Wales have a faulty gene which puts them at an unusually high risk of developing heart disease or dying suddenly at a young age.

Sioned said “I wanted to raise money for BHF’s research into inherited heart conditions. I’m not a natural runner but I wanted to do something for my dad and to help other families who are affected by heart diseases. Running the Cardiff half was a challenge for me, but I really enjoyed the experience and the atmosphere on the day so much, that I’ve signed up to run it again this year!”

Sioned will be lining up at the start of the Cardiff Half Marathon this autumn alongside 300 other BHF Champions, aiming to raise more than £140,000 collectively. With this money, the BHF promise to continue to fund research into HCM and other heart and circulatory conditions. Those living with these conditions will be able to get the care and treatment they need, so they can keep doing the things they love.

When you run for the BHF, you run for people like Grahaeme. You run for dads, for mums, for brothers, for sisters. You run to keep families together. One life saving breakthrough at a time.

The BHF still have a limited number of charity places left. If you’d like to join the team, you can sign up today for £10 if you pledge to raise £250 in sponsorship. You can also join the team as an Own Place runner if you already have a place in the event.