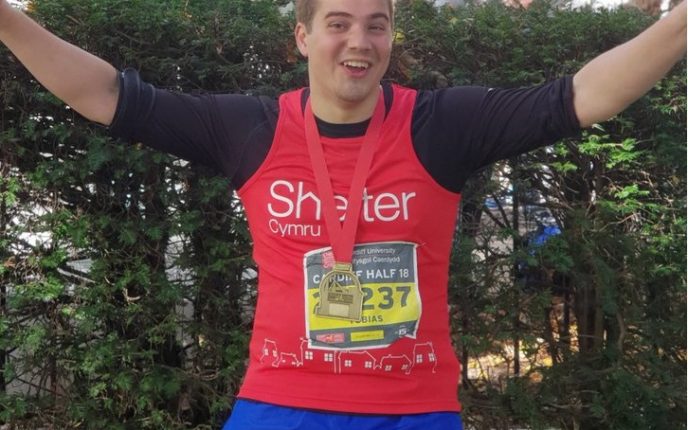 Runners can join the fight against homelessness in the Welsh capital by raising vital funds for Shelter Cymru at the Cardiff University/Cardiff Half Marathon.

The independent Welsh charity will use the nation’s largest mass participation event to increase awareness of the growing crisis on the streets of Cardiff on Sunday 6th October.

Evidence suggests there has been a 40 percent increase in rough sleeping over the last two years, but the powerful images of tents and occupied doorways in the city centre are just the tip of the homelessness iceberg, with thousands more struggling to find permanent accommodation.

Shelter Cymru are asking runners of all abilities to join them alongside 25,000 participants at Wales’ biggest charity fundraising event, which is set to sell out in record time.

Kerys Sheppard, Head of Fundraising at Shelter Cymru, said: “Our 500 runners will no doubt feel a huge sense of achievement upon completing the Half Marathon itself, but perhaps an even better achievement is the knowledge that their collective fundraising will enable us to help over 1,000 individuals and families in Wales when they need us most.

“Homelessness is a trauma and no-one should face it alone. We would encourage runners of all abilities to sign-up and join Team Shelter Cymru and help us to meet the ever-increasing demand on our services. The fight against homelessness in Wales is not over.”

Last year, Shelter Cymru supported almost 20,000 people in Wales who were either living in poor housing or facing/ experiencing homelessness – that’s 1 in every 158 people. Over 7,000 of these were children. Shelter Cymru provides independent, expert housing advice and support on the phone, online and face to face in 75 advice surgeries across all 22 local authorities in Wales; the charity’s frontline services are free of charge and available to all.

The first person to join Team Shelter Cymru was Andrew Weltch, who lives in Cardiff. Andrew said: “I believe that everyone in Wales should have a place to call home. I’m running as part of Team Shelter Cymru because I want to help this brilliant organisation make that a reality.”

Run 4 Wales Chief Executive Matt Newman said: “As one of the city’s largest events, the Cardiff University/Cardiff Half Marathon is committed to supporting good causes in the Welsh capital.

“Shelter Cymru do amazing work to support some of the nation’s most vulnerable people, and I would urge runners to take on the challenge in the name of the independent charity to support the fight against rising homelessness in Wales.”

Runners can sign up to one of Shelter Cymru’s places for free when pledging to raise £200. As a thank you, you will receive a Shelter Cymru running vest and training/ fundraising support from our friendly and experienced team.