2019 was my very first Half marathon, I had signed up for a half in 2017 (Chester half), but was diagnosed with a rare and aggressive type of breast cancer early 2017 so it put a stop to all of my training as I struggled through treatment. After having surgery and 8 months of treatment I slowly started getting back in to running again, I decided I would complete that Half, but wanted it to be a big one! So I signed up for Cardiff 2019… WOW! It was one of the best things I’ve ever done, I went through a wave of emotions while running, and felt grateful that I could take every step of that 13.1 miles! Amazing crowd, amazing medal, amazing City, I took every moment in, I’ll never forget it!

In 2017 I’d only just moved to Cardiff was feeling a little bit lost in a new city and far from home. I took part in the University student run on the Saturday in an attempt to meet some other runners and ended up winning and being asked if I wanted to hold the finish line for the elite races the next day. It was an amazing experience for me as a relatively new runner and I remember being blown away by the speed the athletes had covered the half marathon distance, spending the rest of the morning watching athletes of all abilities cross that finish line and the emotion of what that meant to them, that definitely set off a spark in me to one day complete the half marathon in Cardiff myself and certainly made me start to feel at home in my new city.

In 2019, I finally got to stand on that start line – after 6 months of training focused on the half, and with my parents stood next to me, I had to fight to hold back tears. I’m not sure if it was the nerves, the incredible atmosphere or just that I was getting to race around the city that really had grown me as a runner and become a place I could call home but as soon as that start gun went it was all about the running. It’s one of the only races I’ve loved every second of, even the parts where it really hurt!

This event has given me so many memorable moments that I will never ever forget, thank you. Here’s a photo of my son joining the support crew!

In 2017, I was suffering with depression and anxiety. After meeting with a few friends boxing, they asked if I would do the Cardiff Half Marathon. I’d never run that distance before. The day from start to finish was fantastic, really gripped me! I ran the race quite well for a first event at 2:10. The atmosphere, the encouragement, the support, the crowds … just everything, I loved it! I set about running regularly to help my depression, I’m happiest and most relaxed when I’m running. Cardiff half… best event in the world! 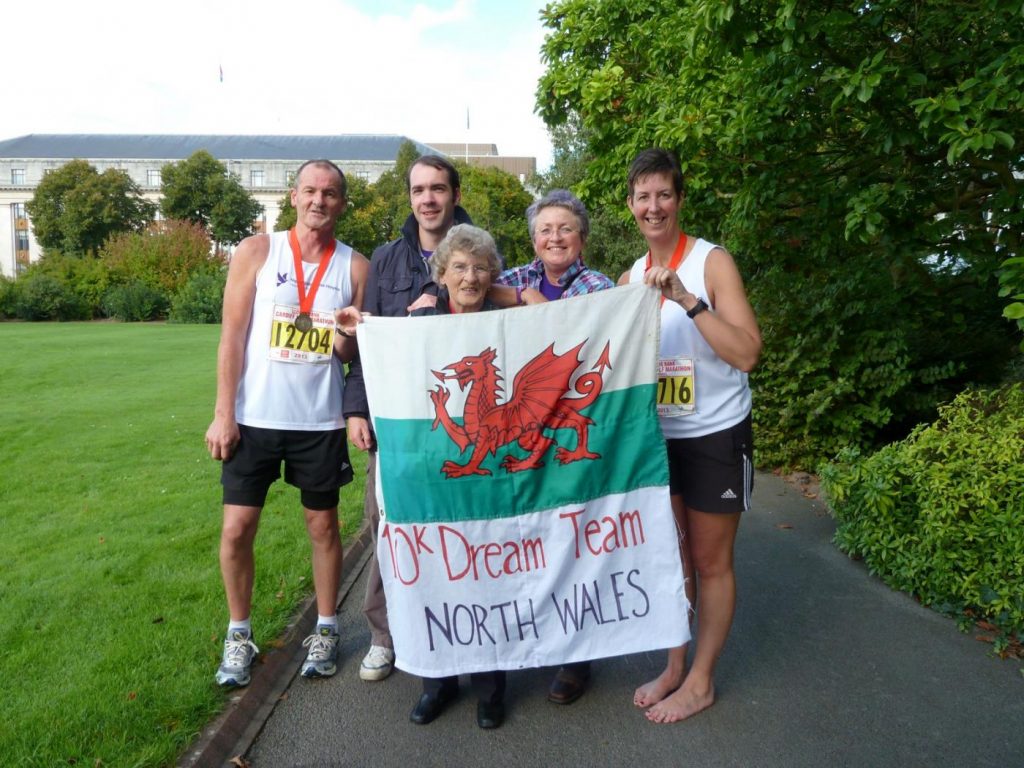 I retired from North Wales Police in April 2011 after 30 years service. 12 months later, I was diagnosed with a brain stem tumour. Following intrusive surgery my vision, speech and mobility were impaired. In November 2012, I rejoined my local gym determined to gain at least a minimal level of mobility. I was deposited there on a regular basis. With encouragement and support from family and friends I gradually began to walk unaided again, and on the 7th April, 2013, I and my partner Llinos completed our first road run, the Wrexham 10K, in aid of Nightingale House Hospice. I still had no feeling down one side of my body due to the location of the tumour, but the “10K Dream Team” as we called ourselves decided to attempt the Cardiff Half Marathon on the 6th October 2013 in aid of the hospice. My mum, sister and my sons came down to watch us run and we did it, we did it, we did it, the sense of euphoria and achievement was overwhelming. I still get emotional thinking about the difficult and demanding times we went through at that time.

My favourite memory came from last year, when I ran the Toddler Dash with my daughter Imogen for the first time. She had turned three a few months earlier, and wanted to do running “just like Mummy and Daddy”, and I’ll never forget how excited she got in the build up to it and how much she enjoyed the day, running in fancy dress, and how proud she was when she’d finished. She still mentions it now, and asks when she’ll get to do her toddler dash again, so I think Cardiff might have helped to inspire another future runner!