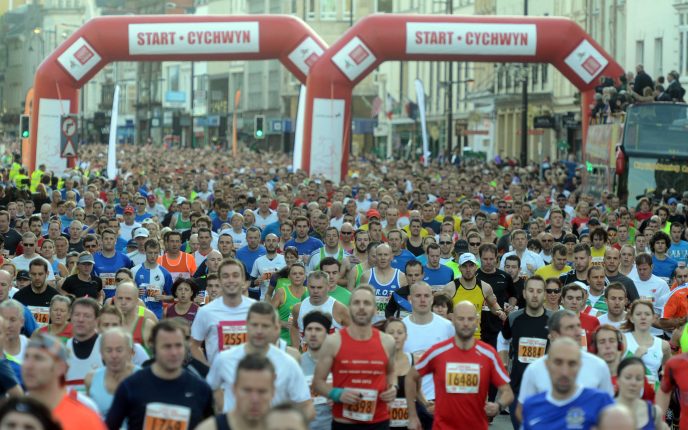 Numbers for the Lloyds Bank Cardiff Half Marathon have smashed through 20,000 for the first time.

More than 21,000 runners have registered to take part in this year’s race on Sunday, 5 October, with up to a further 1,500 expected to complete the Family Fun Run and Mile Road Races in the Civic Centre the day before the main event.

The record-breaking figures confirm the Lloyds Bank Cardiff Half Marathon as Wales’ biggest mass participation event and the UK’s second-largest half marathon after the Great North Run.

An estimated 50,000 supporters are also expected to line the iconic route, which this year incorporates a grandstand finish outside the stunning Royal Welsh College of Music and Drama on North Road, Cardiff.

“We are working hard to continually improve the experience for those taking part in the Family Fun Run, Mile Road Races and showpiece half marathon event and this year promises to be better than ever before with a new finishing area.

“With a bigger runners’ village, an enhanced Corporate Relay Challenge and more links with local businesses we are confident the Lloyds Bank Cardiff Half Marathon will once again be a big hit with everyone taking part.

“Having already secured the prestigious IAAF World Half Marathon Championships for Cardiff in 2016, we will continue to strive to make the Lloyds Bank Cardiff Half Marathon one of Europe’s premier road races.”

Last year’s winner Loitarakwai Lengurisi, from Kenya, is returning to defend his title, while on the women’s side the leading British finisher at the 2014 IAAF World Championships in Copenhagen, Alyson Dixon, will lead the

charge for Trish Jones’ British crown. Nick Torry will also be back on the Cardiff start-line looking to retain his British title.

As well as a world-class field at the front of the race, organisers are also expecting to see a rise in the £2.3m raised for charity at last year’s event.

Entries for the 2014 Lloyds Bank Cardiff Half Marathon have now closed but online and on-the-day entries are still being taken for the Mile Road Races and the Family Fun Run on Saturday, 4 October.