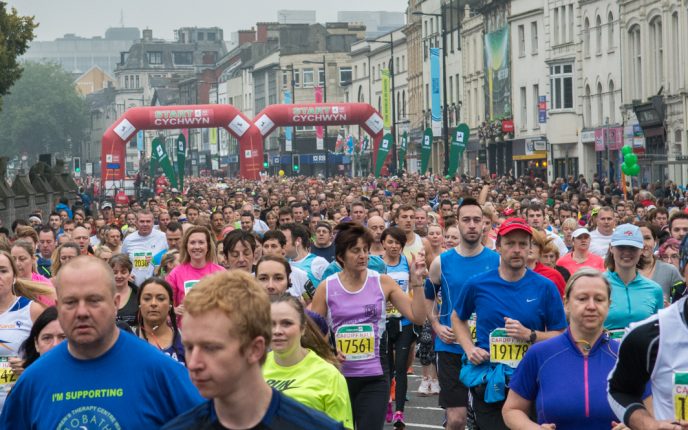 Record numbers completed the biggest and best ever Lloyds Bank Cardiff Half Marathon on another superb day in the Welsh capital.

Almost 16,000 runners crossed the line on Sunday, confirming the Lloyds Bank Cardiff Half Marathon as Wales’ biggest mass participation event and the second biggest half marathon in the UK.

Live television coverage on BBC Wales helped the race reach a wider audience than ever before and runners were supported by more than 50,000 spectators along the 13.1m course – estimated to be the biggest crowd in the event’s history.

It was a perfect dress rehearsal for the prestigious IAAF/Cardiff University World Half Marathon Championships which comes to Cardiff on Easter Saturday 26 March next year.

Nigel Roberts, Run 4 Wales chairman, said: “That was fantastic! The Lloyds Bank Cardiff Half Marathon was bigger and better than ever before – now bring on the IAAF/Cardiff University World Championships in March.

“Cardiff is ready to entertain the greatest distance runners in the world and what a show we are going to put on!

“The route was lined with tens of thousands of fans, all roaring on the athletes, and we expect to double those numbers when the world’s best come to Cardiff.

“This event has grown and grown and I’d like to thank all the sponsors, organisers and volunteers for the hours of devotion they have put into making it not only Wales’ biggest sporting extravaganza, but now also one of Britain’s’ top road running events.

“Only the Great North Run and the London marathon are bigger than our annual race around the Welsh capital but we’re building into an amazing force and closing the gap!

“It never ceases to amaze me just how many people are prepared to put in the training to run for 13.1 miles. But when you see the joy on their faces at the end, sharing their massive sense of achievement and the see how much money so many of them raise for charity, it is difficult not to feel inspired.

“The fact we were live on BBC Wales TV and radio this year will have made a massive impact on those would-be, armchair runners at home all over Wales. What I would say to everyone who has never experienced the thrill of being part of such a massive sporting occasion is to sign up to run with the greatest athletes in the world on Easter Saturday in 2016.

“Yes, you can come and have a go! The race isn’t just for the elite, it is for everyone. And we want to fill the 25,000 places that are available for those runners lucky enough to get in to the event on 26th March. Cardiff has hosted so many world classes sporting events this millennium, and the IAAF/Cardiff University World Half Marathon Championship’s will be right up there with the very best of them.”

Also to the Police, the ambulance service, the Welsh Government, Cardiff Council, Vale of Glamorgan Council, Welsh Athletics and the Run4Wales staff for their incredible work in making the day such a success.