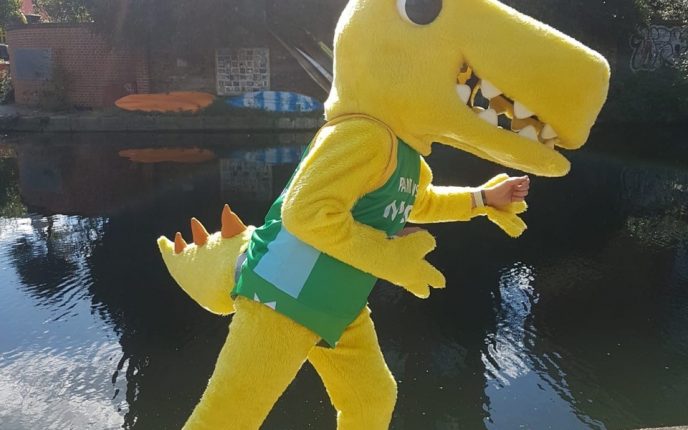 Pantosaurus ready to stomp footprint on Cardiff Half

A giant yellow dinosaur will be pulling on the NSPCC vest for a challenge of prehistoric proportions at Sunday’s Cardiff University/Cardiff Half Marathon.

Tackling 13.1 miles alongside 25,000 runners at Wales’ largest event is a massive achievement, but Stephen Nutt will be taking things to another level in aid of the event’s Lead Charity Partner NSPCC.

The marketing manager will be transformed into Pantosaurus, the NSPCC’s loveable mascot and face of the ‘Talk PANTS’ campaign at the UK’s second largest half marathon this weekend.

The NSPCC is this year’s lead charity partner for the Cardiff Half Marathon and more than 675 runners – including Stephen as Pantosaurus – will be wearing green on race day as part of Team NSPCC.

“It’s going to be amazing being part of so many NSPCC runners and hopefully this will spur me along in the dinosaur outfit as it’s going to be a tough slog. My strategy was to make the distance as easy as possible so I’m pretty well trained to run the 13.1 miles.

“Running in the outfit is another matter though. I have done one training run in the outfit. Luckily a couple of colleagues came with me as it’s not very easy to see where you’re going. The reaction from passers-by was quite funny.

“Having worked for the NSPCC for nearly six years now I know the impact it makes on children’s lives so I’m proud to be able to represent the charity and help raise vital funds in its fight for every childhood.

“The atmosphere will be amazing over the weekend, and I need all the support I can get to get around the course.”

The ‘Talk PANTS’ campaign has helped to reach more than 600,000 children safer since its launch four years ago. Talking PANTS is designed to teach children that their body belongs to them, they have the right to say no and to tell someone they trust if they’re ever worried about anything.

The PANTS acronym stands for: P – Privates are private; A – Always remember your body belongs to you; N – No means no; T – Talk about secrets that upset you and S – Speak up, someone can help.

Support from runners will also benefit three NSPCC service centres in Wales – Cardiff, Swansea and Prestatyn – which provide direct help to vulnerable children and their families.

Des Mannion, head of NSPCC Cymru/Wales, said: “It’s vital that we help children who have suffered abuse and neglect and work to prevent it from happening in the first place.

“The NSPCC carries out a great deal of this work in schools, via Childline and in our service centres. But we want to do more and we need the help of the public to achieve our aims.

“Stephen’s support is very much appreciated and we wish him – and Pantosaurus – the best of luck in the Cardiff Half.”

To sponsor Stephen, visit www.justgiving.com/pantosaurus. Pantosaurus will also be taking part in the mascot race during the festival of running, which will be held the day before the half marathon on Saturday 6 October at Cardiff City Hall.

To take part in an event for the NSPCC, visit https://www.nspcc.org.uk/what-you-can-do