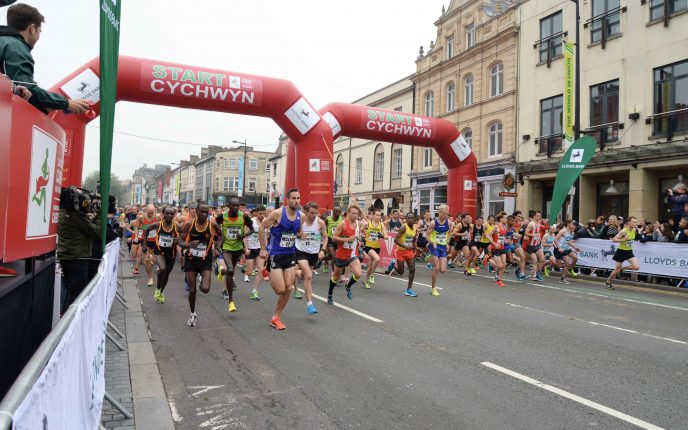 The strongest elite field ever assembled for the Cardiff University/Cardiff Half Marathon will be aiming to break records on Sunday 2 October.

Following the success of the IAAF/Cardiff University World Half Marathon Championships in the Welsh capital in March, more world class runners than ever before have accepted an invitation to run the Cardiff Half Marathon next month.

Two athletes fresh from competing at the Olympic Games in Rio go in the men’s race, while in the women’s field the reigning Commonwealth Games marathon champion will be among the favourites.

Reigning Paris Marathon champion Cybrian Kotut from Kenya is the fastest man in the field with a personal best of 59:12, well inside the Cardiff Half Marathon course record of 61:51 set by Loitarakwai Lengurisi in 2013 and just shy of the astonishing time of 59:10 run by Geoffrey Kamworor in awful conditions at the IAAF/Cardiff University World Half Marathon Championships in March.

Ethiopia’s Hunegnaw Mesfin is the second athlete with a sub 60-minute personal best (59.39) and Kenya’s Charles Mneria makes his debut over the half marathon distance having competed in the 5,000m final at the 2016 Rio Olympics.

Current Cardiff University/Cardiff Half Marathon champion Ben Siwa (Uganda) is only the fifth-fastest man in the field, such is the depth of 2016’s race and he is joined by last year’s second-place finisher Gideon Kimosop.

Three-time Welsh half marathon champion and Great Britain international Dewi Griffiths heads the home contingent and Ireland’s Paul Pollock, who competed at this summer’s Olympics in the marathon, will be looking to improve on his PB of 62:10.

The women’s line-up is led by the exciting Kenyan talent Violah Jepchumba, who travels to the Welsh capital in sparkling form having clocked 30:24 at the Prague 10k last month.

The 25-year-old’s half marathon best of 65:51, well inside the Cardiff Half Marathon event record of 71:10 set by Susan Partridge in 2012, is the third-fastest women’s half marathon time in history.

Great Britain’s Michelle Ross-Cope, Jenny Spink and Rachel Felton will all be looking to take advantage of the fast and flat course to improve on their PBs.