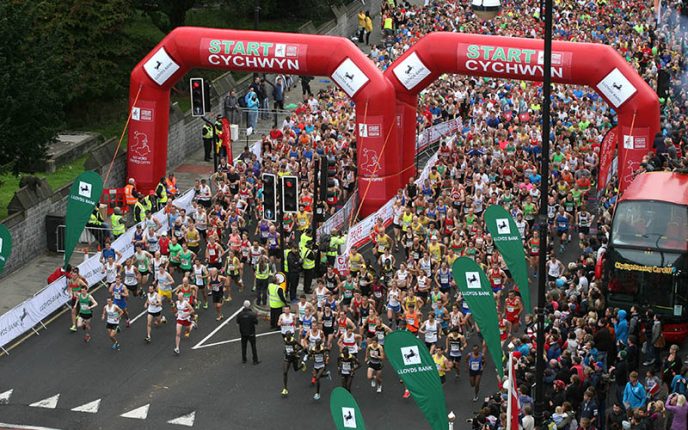 Officially the Biggest Lloyds Bank Cardiff Half ever

It’s now a fact. The 2014 Lloyds Bank Cardiff Half Marathon was the biggest Cardiff Half ever, with close to 16,000 runners competing on the day.
Heading the field were world-class athletes, followed by thousands of club runners, first time runners and a host of colourful characters raising money for more than 800 worthy causes – Cardiff and Wales should be proud!

Conditions were ideal for racing, as the fresh start gave away to glorious sunshine which showed off Cardiff’s iconic sites, taking runners past Cardiff Castle, the Senedd and Millennium Centre in Cardiff Bay, Roath Park Lake and finishing in the Royal Welsh College of Music and Drama.

Kenya’s Boniface Kongin took full advantage of the world-class course as he stormed to victory in the men’s event in an impressive 62 min, 2 seconds. The women’s field was a close affair, with Joan Chelimo coming out on top after a dramatic sprint finish with a time of 72min, 26 seconds.

Speaking about the race Run 4 Wales chairman Nigel Roberts said: The run is a commentator’s dream. Cardiff is a beautiful City – a European City. It has so much history, so many iconic locations. I see no limit to this event, I’d like to see us as the best half marathon in Europe.

We have a fantastic team of sponsors behind us, including or Principle Partner Lloyds Bank and Official Partners, Cardiff Metropolitan University, Arriva Trains Wales, Brooks Running, Maxi Nutrition and Cardiff Metropolitan. All are an integral part to our success.
It was also a record year for volunteers, with over 600 signing up to help deliver the event on the day, on behalf of Run 4 Wales I want to thank them, without their commitment yesterday would not have been possible.