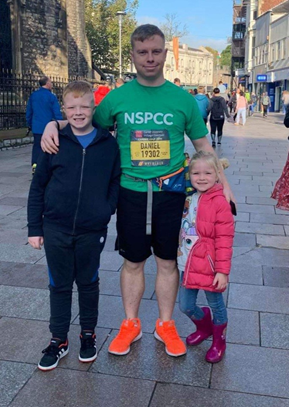 Having completed the Cardiff Half Marathon with #TeamNSPCC in 2019, Daniel Jones has decided to step up once more and register for the 2021 event, helping us to continue to be here for children.

Initially, Daniel had signed up the 2019 Cardiff Half Marathon because a close friend of his, who he says, “hasn’t got the most athletic build,” completed the event and seemed so proud and enthusiastic that it made him want to get involved. He confesses that he actually chose to run for a charity to motivate himself to not give up, and selected #TeamNSPCC because, as a father, preventing child abuse is an issue that’s close to his heart.

He’s joining the team again for the 2021 event as he felt well supported last year – this included the encouragement he received in Cardiff from our cheer team on the day: “I’d reach a part of the route where I’d start to feel tired or alone, and suddenly someone in the crowd would spot my NSPCC t-shirt and spur me on.” He will be setting up an online fundraising page to encourage friends, family and colleagues to sponsor him. He may even bring back his ‘Guess the finish time’ quiz (complete with a winner’s prize), used in 2019 to inspire further donations.

As Daniel’s job still required that he go into work during lockdown, he has only been able to run now and again in preparation, but plans to increase his training closer to 28 March 2021. In 2019, for his half-marathon debut, Daniel hadn’t set himself a target because he “just wanted to finish it.”  This time around, he approaches the event with greater confidence and ambition, and we know he’s going to smash it. Thank you, Daniel, for your continued support – we couldn’t do what we do without the dedication of people like you.