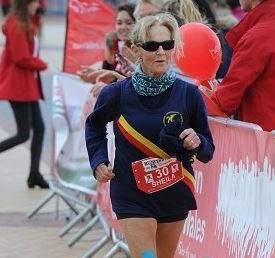 She may be suffering with arthritis, have a dodgy ticker, had operations on her two big toes and had her right knee totally reconstructed a year ago, but nothing is going to stop Shelia Symonds from taking part in the Lloyds Bank Cardiff Half Marathon once again this year.

The sprightly 82-year-old likes nothing better than getting out on the road and she has been putting in the miles ahead of her return to the Welsh capital for her latest half-marathon on Sunday, 4 October.

“I so enjoyed last year’s event that I signed-up straight away for 2015 and booked three nights at the Holiday Inn. I’m on track for this year’s race and I’m really looking forward to another great occasion,” said Sheila.

“I managed to complete 10 miles in just under two-and-a-half hours this week and I’m determined to get around the Cardiff course once more. I am starting to slow down a bit now because of the arthritis, but there is nothing that’s going to stop me getting on the start line and reaching the finishing tape.”

Sheila took up running some 30 years ago shortly after losing her husband, Peter. The two used to climb mountains together all over the world and used to tangle on the squash court as well.

But when it came to running Peter used to tell his wife “you aren’t strong enough” because of her heart condition. No sooner had Peter died than Sheila bought a pair of running shoes and found a new life for herself in athletics after moving from Aylesbury to Mid Wales.

“The London Marathon started the year before Peter died and I suggested we ought to have a go at it. He said he didn’t have the time and that I wouldn’t be strong enough – that’s threw down the gauntlet to me,” recalled Sheila.

“I ran my first London Marathon in 1986 and I’ve done 12 to date. I’ve lost count of the number of half-marathons I’ve completed.

“I had been a keen squash player before I started to run and when I came to Wales to live I fell in with a lovely group of people at the Bro Dysinni Athletic Club. Since then I’ve joined Merionedd Athletic Club, which is a bit closer to my home in Dolgellau.”

Sheila completed last year’s Cardiff Half Marathon a mere 13 weeks after she had had her right knee completely reconstructed. She asked the surgeon if he thought she would be able to do it in such a short time frame and when he gave her the nod she went into strict training.

Remarkably, she recovered in time and came to Cardiff and completed the course successfully. Now she wants to do it again.

“I threw away the crutches as soon as I could and did as much walking as I could to ease my way back. By 10 weeks after the operation I was covering 10 miles and that kept me on course for the big run in Cardiff three weeks later,” said Sheila.

Nothing, it seems, is going to stop here from reaching her running goals and if things go well on 4 October she may even consider coming back to take on the world’s elite distance runners in the Cardiff University / IAAF World Half Marathon Championships on Easter Saturday next year.

“Isn’t it great to see Wales earning recognition on the world stage by hosting events like the World Mountain Championships in the north and the half marathon in Cardiff next Easter,” she added.