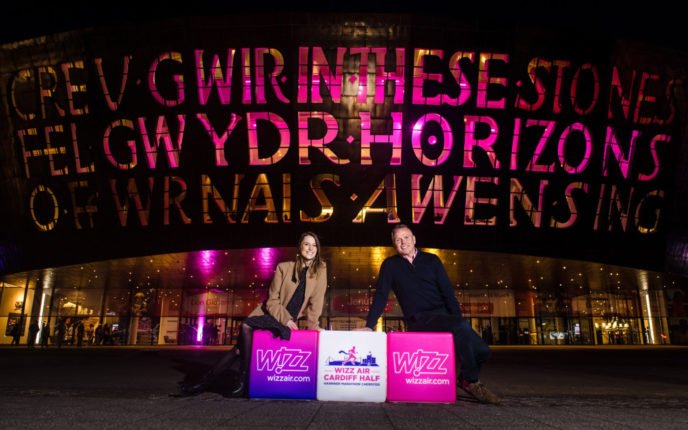 Wizz Air has today been announced as the new title sponsor of the Cardiff Half Marathon as entries for the 19th edition of the event go on sale.

The leading and fastest-growing low-cost European airline will take over the title sponsorship from Cardiff University, who have been the partner in position since 2016 – ahead of the opening of their new base at Cardiff Airport.

Matt Newman, Run 4 Wales Chief Executive, commented: “The Cardiff Half Marathon has become a truly international event, and this is an exciting new chapter in our history.”

“Our new partnership with Wizz Air will help us to further expand the event, develop new experiences and innovations around the race and showcase Cardiff as one of Europe’s leading destinations for running tourism.”

“The legacy of hosting the World Half Marathon in 2016 has seen the event grow into one of Europe’s largest half marathons. Our new relationship with Wizz Air, inclusion in the newly launched SuperHalfs series and being awarded a World Athletics Elite Road Race Label demonstrates an exciting future for the race as it continues to attract runners from all over the world to Cardiff and Wales.”

Marion Geoffroy, UK Managing Director at Wizz Air, commented: “We are delighted to be the title sponsor for the Cardiff Half Marathon as it demonstrates our strong commitment to this exciting market. We hope this will be the start of a fantastic partnership for years to come.

“We also look forward to launching Wizz Air flights from Cardiff Airport in April and to providing low-fare connectivity to our customers in Wales and the surrounding region.”

To celebrate the new partnership, event organisers R4W will be hiding colourful boxes around the city over the coming weeks showcasing the refreshed Wizz Air Cardiff Half brand. Those able to locate them will have the opportunity to win £200 WIZZ flight vouchers.

Clues on how to locate the boxes, which will be placed in locations around the iconic 13.1-mile route will be announced in the coming days.

Entries for the event are now on sale at with a limited number of discounted early bird entries available.

Runners keen to take part are encouraged to secure their space as soon as possible. All of the discounted early bird entries were snapped up in less than 24 hours ahead of the last edition of the race and all 27,500 available spaces sold out in less than 3 months.

Enter Now
Back to news