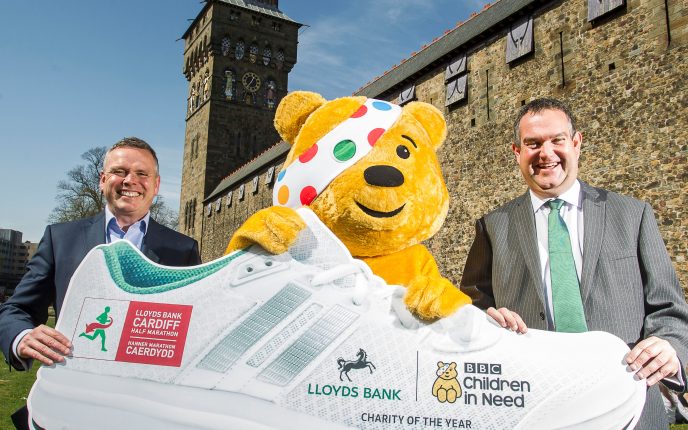 LLOYDS BANK CONTINUES ITS SUPPORT FOR THE CARDIFF HALF MARATHON

Entry figures for the Lloyds Bank Cardiff Half Marathon 2015 are already up on 2014, with a record number of runners expected to sign up for the race, which will take place in the Welsh capital on Sunday 4th October.

Speaking about the renewed partnership, Matt Newman CEO of Run 4 Wales, the company behind the Lloyds Bank Cardiff Half Marathon said:

“Everyone at Run 4 Wales is delighted Lloyds Bank will continue as Principle Partner for 2015.

“Our ambition for the event remains strong and we are committed to maintaining its position as one of the UK’s leading mass participation events. Lloyds Bank shares this ambition and like us, values its importance within the community.

“This year we aim to grow the community element of the event by making the Lloyds Bank Festival of Running (which takes place the day before the half marathon) bigger than ever. We are introducing the Lloyds Bank Toddler Dash in association with BBC Children in Need, an activity which will enable more families to get involved in the day and will extend the reach and running experience to a new and younger audience within the local community. BBC Children in Need is Lloyds Bank’s Charity of the Year and we are delighted to be able to support their invaluable work with children and young people throughout the race weekend.

“2014 was a hugely significant year for us, with a record number of runners and spectators, as well as raising over £2.4 million for charities. With Lloyds Bank on board, 2015 is now on course to break all previous records.”

Allan Griffiths, Lloyds Bank, Regional Ambassador for Wales  said:  “2015 is a milestone year for Lloyds Bank; we mark our 250th anniversary on 3 June.  Continuing to be at the heart of the local community is of immense importance to us, and the Lloyds Bank Cardiff Half Marathon brings thousands of runners at all levels together, raising millions of pounds for many worthy charities.   Hundreds of our colleagues will be amongst them raising money for BBC Children in Need, our charity of the year.  Every mile they run and every step they take can make an amazing difference to disadvantaged children and young people across the UK.

Entries for the 2015 Lloyds Bank Cardiff Half Marathon are currently open; to find out more or to secure your place is Wales’ largest road race visit cardiffhalfmarathon.co.uk