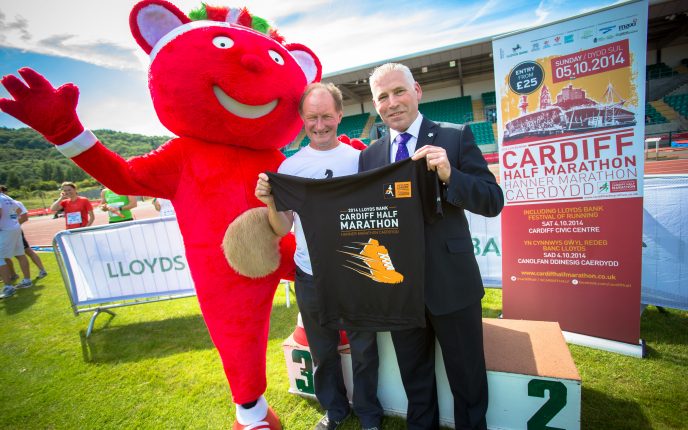 22,000 runners are expected to take part in this year’s race, which for the first year will finish outside the iconic Royal Welsh College of Music and Drama. Each runner that crosses the finish line will receive an official race t-shirt, courtesy of the event’s official Sportswear Partner Brooks Running.

The 2014 design was revealed at a recent training afternoon held for Lloyds Bank employees taking part in this year’s race. Speaking at the event Run 4 Wales Head of Marketing and Communication said;

“We want our participants to have a memorable experience, so to have a running brand such as Brooks supplying a race t-shirt to each of our runners is brilliant. The average Brooks t-shirt retails at £15, meaning we can really reward our runners’ for choosing to take part in the Lloyds Bank Cardiff Half Marathon.

“Last year’s race t-shirt was so popular, that we put a lot of effort into the concept for this year. We have gone for a black t-shirt and a modern design, that we hope runners will wear with pride after the event. “

Speaking about their partnership with the race Mike East of Brooks Running said.

“As part of our agreement with the Lloyds Cardiff Half Marathon, we are delighted to provide all participants with our highly breathable technical tee. With a great look and feel we are sure that many of the participants will be wearing this tee for many more runs after 5th October”

Want to guarantee your very own official Lloyds Bank Cardiff Half Marathon t-shirt, sign up for the race today at www.cardiffhalfmarathon.co.uk. Entry starts from £25.