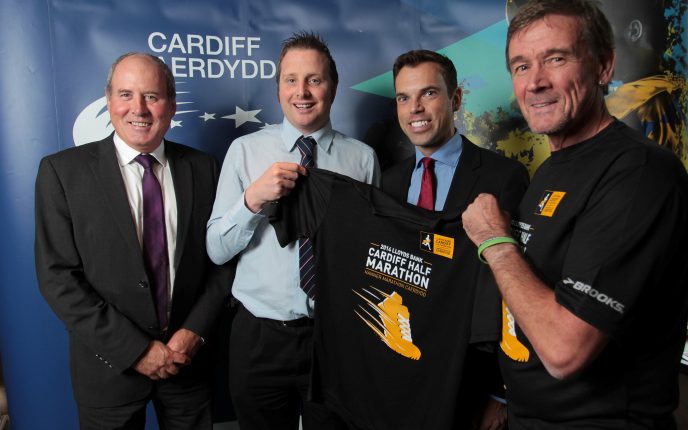 The Lloyds Bank Cardiff Half Marathon is ready to take centre stage in the Welsh capital on Sunday (5th October) with a record 21,124 runners having signed up for this year’s race.

Wales’ biggest mass participation event is warming-up to host the IAAF World Half Marathon Championships in 2016 and the runners taking part in the UK and Welsh Half Marathon championships this weekend will get the chance to test the course on which the world’s greatest distance runners will battle it out on Easter Saturday, 26 March, 2016.

Sunday’s race will also be one of the showpiece events in Cardiff’s year as ‘European Capital of Sport’, joining Wales’ 6 Nations rugby matches, the Heineken Cup Final, the Uefa Super Cup and the England v India One Day International as the jewels in the crown of an amazing sporting year.

In its third year under the management of Run4Wales, the Lloyds Bank Cardiff Half Marathon has shown an 11% growth in entries this year to break through the 21,000 barrier for the first time. That figure further underlines the status of the race as the second biggest half marathon in the UK after the Great North Run (56,000 entries) and the third biggest road race in the UK after the London Marathon (36,000 entries).

“This is the third race Run4Wales has managed since taking over from the great work done by Barnardos for nine years and we’ve grown the field by more than one third,” said Run4Wales chairman, Nigel Roberts.

“We believe we have taken a good event and turned it into a major event for Cardiff and Wales. By tweaking the emphasis slightly we now have a world class race for elite athletes at the front, a highly competitive race for club runners chasing personal best times in the middle and a wonderfully healthy charity element at the tail.

“Last year’s winning time of 61 min, 51 sec by Kenya’s Loitarakwai Lengurisi was a record for the event and showed what is possible on one of the best courses in the UK. The year before it was UK star Susan Partridge who set a women’s best time of 71 min, 10 sec.

“As much as we are proud of those times, which prove the world lass nature of the course and field, we were just as pleased last year to have had more finishers under 80 minutes than any other race in the UK and a record 14,000 finishers.

“Such volume shows this great event is doing its bit to help the nation keep fit and get fitter. More than £2.3m was raised for 800 charities and good causes and the Cardiff hoteliers, shops and restaurants also benefitted hugely from a city that was full to overflowing for most of the weekend.

“Our ambition is to grow the race into a serious rival to the Great North Run. It took them 20 years to reach 40,000 runners and we are exactly half-way towards that mark in our 12th year.

“With the continued backing of our wonderful title sponsors, Lloyds Bank, now in their fourth year with the race, and more companies coming on board to help build the profile of the event – Arriva Trains, Cardiff Metropolitan University, Brecon Carreg Water, Lucozade and Maxi Nutrition – we are developing on all fronts.

“The other great thing about the Lloyds Bank Cardiff Half Marathon is that it is beginning to provide much needed cash for grass roots sport. In its first year, Run 4 Wales invested its surpluses into schools athletics and provided a £55,000 lifeline for the Welsh Schools Athletic Association.

“It means this great event is now a ‘win-win’ for Welsh sport in that it provides top quality competition for runners, is a showcase for the sport and provides cash for future generations.”

The weekend kicks-off with the Lloyds Bank Festival of Running and Family Fun Run on Saturday, 4 October between 12 noon – 5.00 pm. Among the highlights will be the Family Fun Run at 1.00 pm (2.4k around the Civic Centre with entries £7.50 per person or £25 for a family of 4), the Mascots Race and the Masters Mile. There is also a special ‘Runners Forum’ in the City Hall at 5.00 pm with leading athletes and Wales’ former world marathon record holder Steve Jones.

The main race on Sunday will be started by one of Cardiff’s most famous sporting sons, Colin Jackson, and the Lloyds Bank Cardiff Half Marathon will start at 9.00 am.

Pic: Try this for size, Deputy Minister. Ken Skates AM, Deputy Minister of Tourism, Sport and Culture is running the Lloyds Bank Cardiff Half Marathon on Sunday and is measured for a race T Shirt by Steve Jones (far right), former world marathon record holder and race ambassador, and Nigel Roberts, Run4Wales chairman.