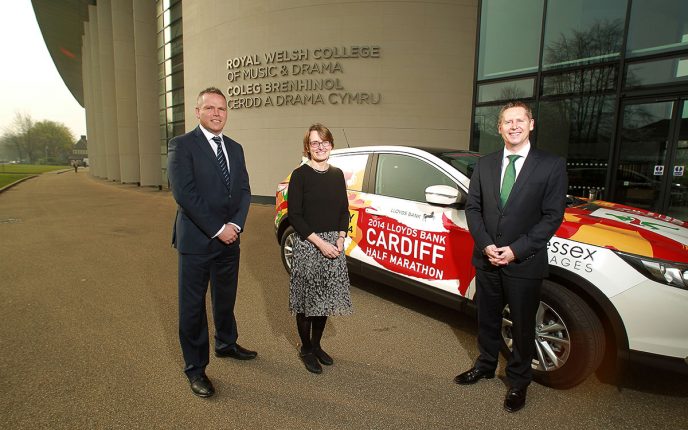 Runners will now complete the 13.1 mile course outside the RWCMD’s award-winning building, which was re-opened in 2011 following a £22.5m redevelopment.

The course change comes as a record 22,000 runners are expected to sign up for this year’s race and in preparation for the World Half Marathon Championships which will be held in Cardiff for the first time in 2016.

“With the World Half Marathon Championships in Cardiff in 2016 and our ambition to grow the Lloyds Bank Cardiff Half Marathon even further, we want to continue to improve the runners’ race day experience.

“The RWCMD building will provide a perfect backdrop for the finish line of Wales’ largest mass participation event.

“It will also allow us to have a bigger spectator viewing area and grandstand so more people can watch their friends and family complete the iconic course.”

Described by former Welsh Government Education Minister Leighton Andrews as “a jewel in the nation’s crown” the building will also host an elite athlete and VIP reception. Hilary Boulding, Principal at the Royal Welsh College of Music & Drama, said: “We were very excited to hear that the Lloyds Bank Cardiff Half Marathon has chosen to locate its new finish line at the College.

“The new buildings, which opened in 2011, have quickly established themselves as a real city landmark, and we think that they will make a fitting and inspirational finale for the many thousands of runners who take part.”

More than 8,000 runners have already registered for this year’s race, a 40% increase on the same time in 2013. An estimated 43,000 spectators lined the streets of Cardiff to watch last year’s event.

Runners raised more than £2.3m for over 1,000 different charities with organisers hoping to break through the £2.5m barrier in 2014.

Lloyds Bank have once again been confirmed as principle partner for the race. Paul Lewis, Lloyds Bank Regional Director for Wales said: “Being involved within our local communities has always been important to us. But the Cardiff Half Marathon has a very special place in our heart.“Not only is the backdrop of this iconic route one of the most picturesque imaginable, but Run 4 Wales has set the programme up in a way that brings runners and non-runners from all parts of our community together.

“We believe we can play a key role in helping Britain prosper and we fully understand that the catalyst for such prosperity starts here – right at the heart of our communities.”

Registration for the Lloyds Bank Cardiff Half Marathon is open, entry starts from £25. To secure your place in Britain’s 2nd largest Half Marathon visit www.cardiffhalfmarathon.co.uk.