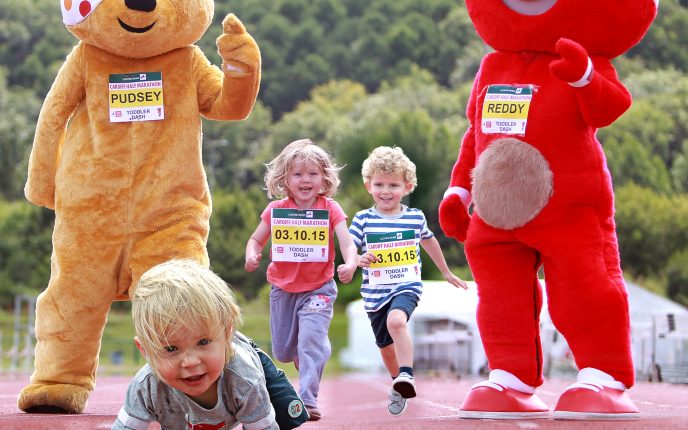 There’s something for all ages at this year’s Lloyds Bank Cardiff Half Marathon thanks to a new ‘toddler dash’ as part of the race festivities.

Officially named the Lloyds Bank Cardiff Half Marathon Toddler Dash in aid of BBC Children in Need, the event is family friendly and aimed at children aged three and under. It involves a 100m ‘dash’ on a fun course in front of Cardiff’s City Hall.

The new activity forms part of the Lloyds Bank Festival of Running on Saturday 3rd October, the day before the showpiece Lloyds Bank Cardiff Half Marathon, when thousands of runners will take to the streets of the capital.

The Lloyds Bank Festival of Running is a day packed full of family friendly entertainment and activities and in addition to the toddler dash, will also include a 2.4 km family fun run around Cardiff’s Civic Centre. There’s also the chance to meet Pudsey Bear!

Carrie Green, Head of Commercial for BBC Children in Need, said: “The Toddler Dash will be fun for the whole family whilst helping raise money to help disadvantaged young lives, right across the UK. We thank Lloyds Banking Group for their on-going support, and look forward to seeing as many families as possible on the starting line!”

Allan Griffiths, Lloyds Bank Regional Ambassador for Wales said “The Toddler Dash is a fantastic addition for this year’s Lloyds Bank Cardiff Half Marathon. Not only will it introduce young children to running, but will also support the great work of the Group’s Charity of the Year, BBC Children in Need.  We are very proud to work with the organisers year-on-year and to watch it grow, proving this truly is an all-encompassing event for all ages and abilities.”

Registration for the Toddler Dash is free via the Lloyds Bank Cardiff Half Marathon website, with a suggested £2 donation to be made to BBC Children in Need on the day of the event.

Entry for the Family Fun Run is just £8, or £26 for a family of four. There’s no pressure to record fast times or even run all the way. Instead, runners will be encouraged to dig out their best fancy dress, bring along the rest of your family and friends and enjoy the experience – with a vibrant atmosphere and loads of support from the crowd.

Get your place in the Toddler Dash now!