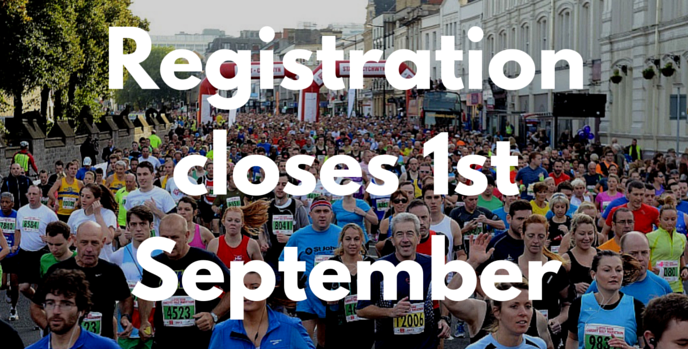 Time is running out for anyone who wants to take part in this year’s Lloyds Bank Cardiff Half Marathon.

Entries for this year’s race close at midnight on September 1, giving runners who have not already signed up just days to grab themselves a place.

Thousands of people have already registered for this year’s race on Sunday 4 October and organisers are confident of another spectacular event.

The Lloyds Bank Cardiff Half Marathon remains Wales’ largest mass participation event and is the second largest half marathon in the UK behind the Great North Run.

Matt Newman, chief executive of organisers Run 4 Wales, commented: “We are really looking forward to another incredible event and once again we have been blown away by the number of people who want to be part of it.

“The brilliant thing about the Lloyds Bank Cardiff Half Marathon is it offers something for everyone, from seasoned club athletes who want to bag a new personal best to amateur runners looking to tick a half marathon off their bucket list.

“If anyone has not yet signed up for this year’s race but it thinking of giving it a go, we would urge you to register now before it’s too late – you won’t regret it.”

Runners who register for this year’s race will be able to sign-up for a free training evening taking place in Cardiff between 6pm-8pm on Wednesday 9 September.

It will include a short talk from a running expert about what to expect on the day, a training run and some light refreshments.

The showpiece Lloyds Bank Cardiff Half Marathon is not the only event taking place over the weekend, with a bigger and better Festival of Running returning on Saturday 3 October.

It includes a Family Fun Run, Mile Road Race Championships and a brand new event, the Toddler Dash in association with BBC Children in Need.

Get your place in the Lloyds Bank Cardiff Half Marathon from just £25 by visiting www.cardiffhalfmarathon.co.uk/register/ and get involved in the conversation using the hashtag #RunTheDiff on Twitter.