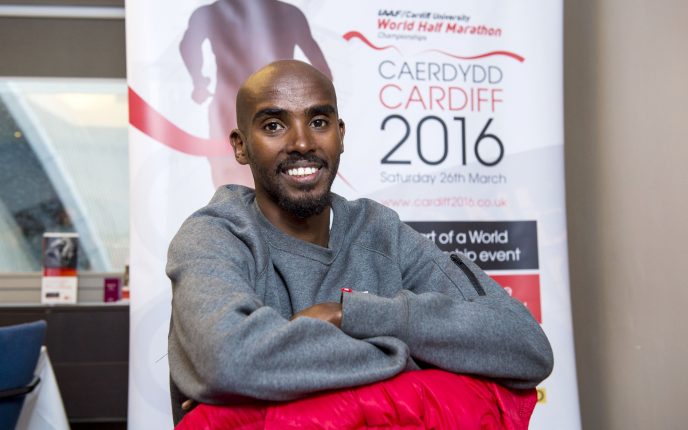 Last chance to run with Mo at the WHM Cardiff 2016

Mo Farah has urged runners not to miss their chance to run with the Olympic champion at the IAAF/Cardiff University World Half Marathon Championships. Registration for the mass participation race at Cardiff 2016 – when up to 20,000 runners will get to race alongside elite athletes including Farah – closes to the public on Monday 29 February, with some promotional spaces still available thereafter. If you want to get involved in the event which takes place on Saturday 26th March you’ll have to get in quick! Click here to register.

Cardiff 2016 will be the most high-profile athletics event ever held in Wales and will be the first time a mass race has been held alongside the showpiece World Half Marathon Championships in the UK. Taking place on Easter Saturday 26 March, the mass participation race has attracted entrants of all ages and abilities from around the world and will be shown live on BBC Television.

Farah said: “I can’t wait for the IAAF/Cardiff University World Half Marathon Championships, it’s going to be exciting and I urge everyone to make sure they are there.

“You can join me on the famous, flat and fast Cardiff course but you need to get in quick because registration closes soon.

“It’s going to be great to have so many people running in the mass race and hopefully I’ll get chance to meet a lot of people and cheer them on as well – because a half marathon is a great achievement.”

Farah is an official ambassador for Cardiff 2016 and has made himself available for selection for the Great Britain and Northern Ireland team due to be announced on March 8.

It will be the first time the double Olympic and World Championships gold medalist has competed in the IAAF World Half Marathon Championships.

The 32-year-old is aiming for an eighth global gold medal to his collection and to become the first male British winner of the event in its 24 year history.

Cardiff will become the fourth UK city to host the event on the same flat, fast and iconic 13.1 mile course used for last year’s record-breaking Cardiff Half Marathon.

More than 50,000 spectators are expected into the capital to watch the elite men’s and women’s race and the mass participation event.