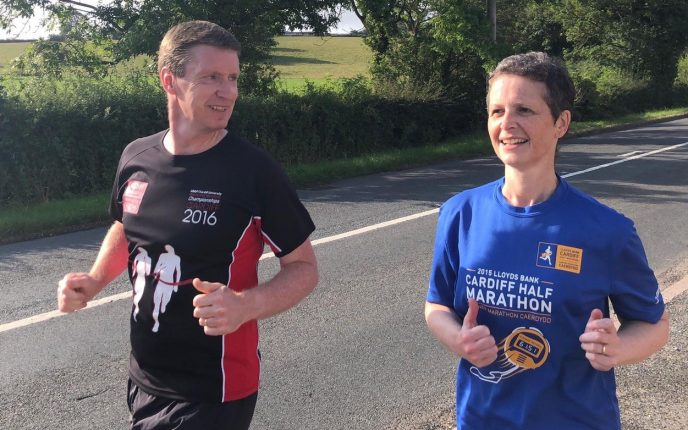 Helen Hay is determined to send a statement to secondary breast cancer by battling through the 13.1 miles of the Cardiff University/Cardiff Half Marathon.

In the latest feature of our #WhyWeRun campaign, we shine a spotlight on the inspiring story of Bridgend mum Helen, who will take on Wales’ largest mass participation event less than two years on on from a series of lifesaving operations and a debilitating course of chemotherapy.

Helen was diagnosed with primary breast cancer in the summer of 2017 before undergoing crucial mastectomy surgery and another operation to have her lymph nodes removed.

Next came six rounds of chemotherapy in an attempt to keep the cancer from spreading, but in November 2018, her fears were realised when doctors delivered the news that the original cancer had spread.

Helen is now one of around 35,000 women living with secondary breast cancer in the UK, but she is fighting back. Less than two years on from barely being able to get up the stairs after intensive treatment, she is about to embark on the challenge of a lifetime at the Cardiff Half.

“I’ve gone through all the operations, I’ve had a mastectomy and had my lymph nodes removed and then went through six rounds of chemotherapy which was absolutely hellish.

“It wasn’t fun at all, I would regularly run about 10 miles before but after the treatment I could barely get up the stairs.

“My reason for doing the Cardiff Half this year is to prove that I can. My doctors believe in me and say I can do it.

“It’s going to be a grind, it’s not going to be pretty but I’ve worked my way from barely being able to run up the stairs after my last round of chemo on December 27 2017, to running 10 miles. It’s been hard work and I feel much worse than I did before but it’s my way of sticking two fingers up to cancer.”

Velindre have been there to support Helen every step of the way. Wales’ premier Cancer Centre provides care, support and treatment to cancer patients and their families from their base in Whitchurch.

Each year they treat over 5,000 new referrals and around 50,000 outpatients, including Helen. And the doctors and nurses have thrown their support behind her mission to complete the Cardiff Half on October 6.

“I’m hoping to raise £1000 for Velindre because their support has been amazing, they’ve always got time for you,” she said.

“I’ve always worried about getting time with people to talk through these things, but the people at Velindre never make you feel like they’re in a rush and give you all the time you need.

“I’m still in treatment now. I’m still taking drugs every day to keep the cancer from growing and some to thin the blood as the cancer thickens it.

“You hear horror stories about the side effects of these drugs but I find that with, activity, they are lessened.

“I don’t come from a sporty family at all, some of them don’t understand why I’m doing this, but my doctors have been really supportive and believe I can do it.”

Every mile will be a battle for Helen in her bid to get across the finish line with 27,500 other runners. But she believes the people of Cardiff and the atmosphere they generate will give her the vital boost she will need to succeed.

“I chose the Cardiff Half as it’s the one I’ve run before, and it’s my local race,” she added. “I love going around a route I know so well, with all the people who come out to support the runners and I love seeing the kids giving out jelly babies and high fives. It all makes for a tremendous atmosphere and it’s fantastic to run past landmarks like the stadium and the castle.”