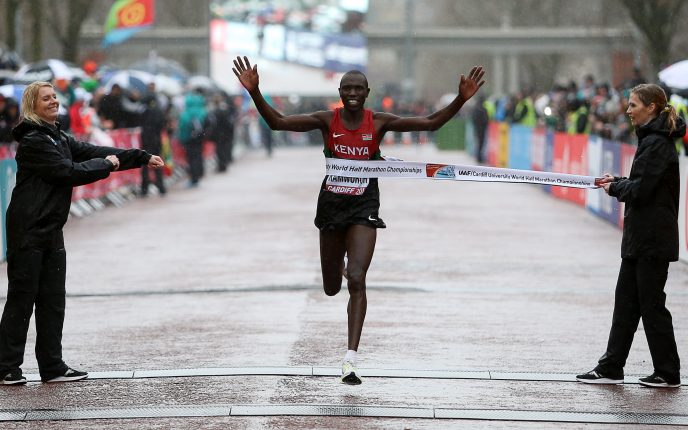 Runners taking on this year’s Cardiff University/Cardiff Half Marathon will have a world-class course record to chase thanks to the exploits of Kenya’s Geoffrey Kamworor.

Kamworor’s stunning performance at the IAAF/Cardiff University World Half Marathon Championships, when he fell at the start line before recovering to claim his second title, smashed the previous course record set on the streets of the Welsh capital.

His 59:10 clocking was more than two and a half minutes quicker than the previous best of 61:51 set by Loitarakwai Lengurisi in 2013.

The new world-class time is one of the fastest half marathons ever recorded in the UK and promises to attract even more elite athletes to Cardiff on Sunday 2 October 2016.

Kamworor’s fall at the start of the IAAF/Cardiff University World Half Marathon Championships men’s race, as well as the poor weather conditions, undoubtedly affected his race so there could be an even quicker time posted in good conditions at this year’s race.

British athlete Susan Partridge still retains the course record in the women’s field with her time of 71.10 in 2012.

Entry to the 2016 Cardiff University/Cardiff Half Marathon is now open. Those signing up before the 30th April can take advantage of an early bird discounted entry offer.