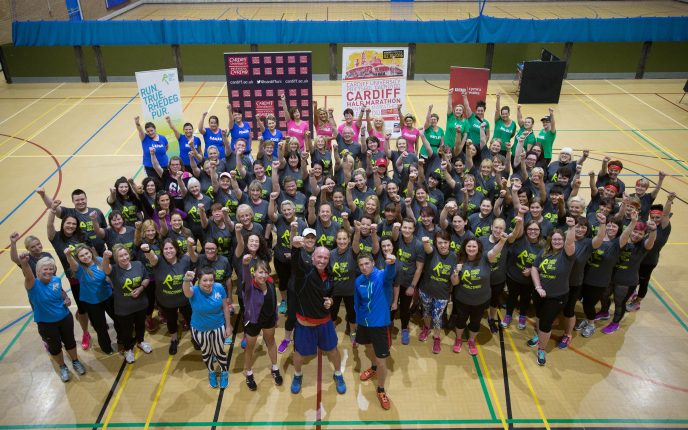 Welsh rugby legend Gareth Thomas has fired the starting pistol for the 100 ‘Alfie’s Angels’ preparing to take on the challenge of the Cardiff University/Cardiff Half Marathon.

As part of the second series of the hit BBC Wales television programme Gareth Thomas: Run For Your Life, the former Wales captain will help coach 100 new runners to complete the iconic 13.1 mile race around the Welsh capital.

Last year Thomas took 16 unfit women from the village of Deri and helped every one of them finish the Cardiff Half Marathon, Wales’ biggest mass participation event.

The programme returns in 2016 and this time Thomas, with the help of former Wales Commonwealth Games athlete James Thie, will train 100 men and women from across Wales in the build-up to this year’s event on Sunday 2 October.

Gareth Thomas commented: “Last year’s programme was one of the best things I have ever done in my life, I gained as much from it as the women taking part.

“When I was asked to come back again but this time for 100 people I must admit I was nervous, but the greater the challenge the bigger the reward at the end.

“I’m doing this because I genuinely care about what we are trying to achieve. Last year the Deri girls inspired so many people to make changes to improve their health and well-being, so imagine what impact we can make with 100 people taking part.”

Gareth met the 100 runners, dubbed ‘Alfie’s Angels’, for the first time at a special training event at title sponsor Cardiff University’s Talybont Sports Centre on Saturday to kick-off their training with 12 weeks to go until race day.

They were given training advice from Thomas and former Welsh mile record holder Thie, as well as dietary advice from specialist Eloise Crowley and a talk from Run Wales ambassador Hannah Phillips.

Run Wales is the new social running programme developed to ‘inspire, encourage and support’ every adult in Wales to run more.

Hannah Phillips, who wrote the book No Run Intended, said: “If I can do it then anyone can and it’s exciting to see Alfie’s Angels at the start of their journey.

“It was easy at the start for me, I had some disasters, but after a while running clicked for me and now I couldn’t imagine my life without running.”

You can catch the Angels in action on Series 2 of ‘Run For Your Life’ on BBC Wales this autumn.