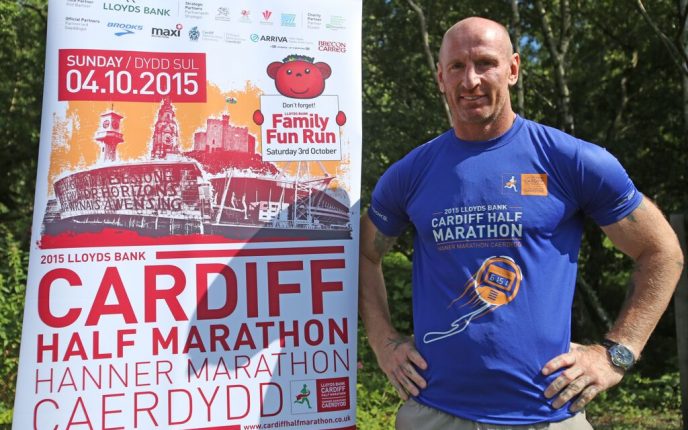 Runners can now get a first glimpse of the official 2015 Lloyds Bank Cardiff Half Marathon t-shirt, which will be given to the 18,000 finishers who are expected to take part in this year’s race on Sunday 4th October.

Supplied by the events official sportswear partner Brooks Running UK, the 2015 t-shirt features a unique design which carries the current course record of 61 minutes and 56 seconds on the front of the royal blue top.

The design is symbolic as organisers Run 4 Wales believe the record could be broken this year as some of Britain’s best runners head to the capital for the trial race for next March’s IAAF/Cardiff University World Half Marathon Championships, Cardiff 2016.

Welsh rugby legend and celebrity Gareth Thomas was given the honour of modelling the sought-after shirt having recently started coaching a group of running novices, all women aged 17 to 60, from the small village of Deri in Caerphilly.

They will all be running the Lloyds Bank Cardiff Half Marathon for the first time and have their experiences captured for a BBC Wales documentary as part of the returning Live Longer Wales season in the autumn.

Thomas, who won 100 caps for Wales, said: “I know what it’s like to wear the Wales jersey with pride and I am sure all the runners will be just as proud once they are wearing their Lloyds Bank Cardiff Half Marathon finishers’ t-shirt.

“Training for a half marathon is a journey which takes months of hard work so it’s great that Brooks Running UK are providing such as brilliant memento to show off once you have completed the challenge.”

Speaking about their involvement in the event, a Brooks Running UK spokesman said: “We are delighted to continue our partnership with the Lloyds Bank Cardiff Half Marathon. The event epitomises Brooks’ values and we are proud to reward every runner with a technical t-shirt as they cross the finish line.”

Get your place in the Lloyds Bank Cardiff Half Marathon from just £25 by visiting www.cardiffhalfmarathon.co.uk/register/ and get involved in the conversation using the hashtag #RUNTHEDIFF on Twitter.