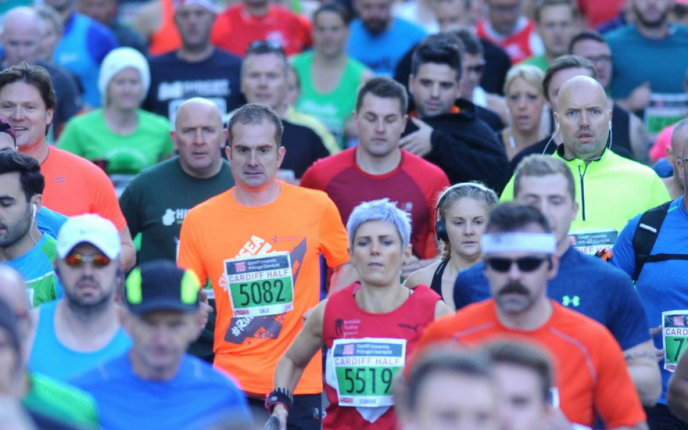 2017 Cardiff Half set to become the biggest running event in Welsh history!

The 2017 Cardiff University/Cardiff Half Marathon is on course to become the biggest running event in Welsh history.

Entry numbers are at a record high with more than five months until race-day on October 1st. Over 11,000 people have already signed up for Wales’ largest mass-participation event, including a spike of almost 700 since the nation watched on in awe of the inspiring London Marathon runners.

The 2016 race around the iconic Welsh capital sold out in only six months, but entries are up by a staggering 38 percent compared to this stage last year. The previous benchmark of 22,000 runners is set to be smashed, so act fast and sign up at www.cardiffhalfmarathon.co.uk if you want to be a part of Wales’s biggest and best race.

Matt Newman, Run 4 Wales CEO, commented: “It’s been incredible to see how far the Cardiff University/Cardiff Half Marathon has come since the race’s inception 14 years ago when around 1,500 runners hit the streets around the Welsh capital.

“We broke the 22,000 mark for entries to last year’s race but judging by this year’s figures, we are set to hit that mark long before the race on October 1st. We cannot wait to welcome runners of all kinds, from the elite field to fundraisers whose efforts raised more than £2.4 million for 800 charities and good causes last year.

“People of all ages and abilities are welcome to enter the Cardiff University/Cardiff Half Marathon, whether you are in a corporate team, running club, casual runner or one of many taking part through a social scheme like Alfie’s Army.”

Organisers expected around 24,000 entries to this year’s race, but that figure could soon be reached meaning a capacity could be set in advance. With this in mind, runners are urged to sign up for what promises to be an unforgettable day in the iconic Welsh capital.

Race-day attracts runners from around the world, but Saturday’s Cardiff University Festival of Running will once again kick off the running fever. The Family Fun Run and Toddler Dash gave children the perfect opportunity to get a taste of a major running event, while some of the UK’s best club runners competed over a one mile course.

The 2016 race sold out in just six months and attracted a record 22,000 runners, but interest in the 2017 race has been higher than ever – with organisers expecting 24,000 runners at the iconic Cardiff Castle start line on Sunday 1st October. Sign up at www.cardiffhalfmarathon.co.uk/register/ to make sure you don’t miss out on what promises to be another day to remember in the Welsh capital.