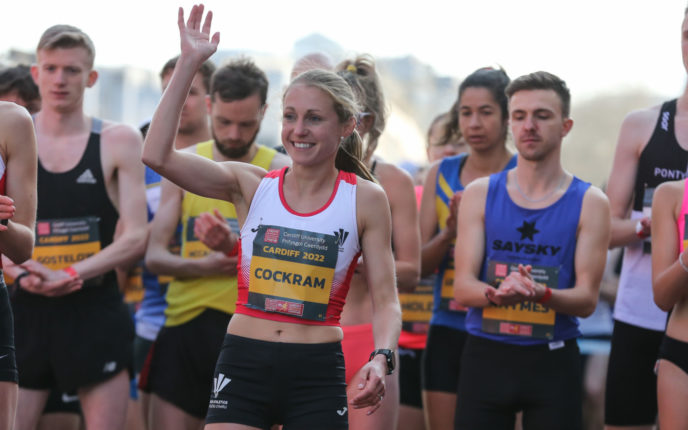 Natasha Cockram produced the run of her career over 13.1 miles to clinch the Cardiff University Cardiff Half Marathon title on home soil.

The reigning British Marathon champion slashed two minutes off her previous personal best to become the first Welsh woman to win the event since Helen Yule 18 years ago. Cockram led from the front from the start line outside Cardiff Castle as the sun shone down on the Welsh capital.

She quickly established a commanding lead and broke clear of her closest rival and countrywoman Bronwen Owen, who was making her half marathon debut. Cockram raced through 10K in 33 minutes and two seconds, 1:45 ahead of Owen, and powered around Roath Park lake and back into the heart of the city to take the title in 1:10:47.

Leeds City runner Owen completed an impressive maiden half marathon run in 1:14:04 , ahead of Taunton AC’s Elle Twentyman (1:14:58). Cockram will be hoping her fine form continues into this year’s Birmingham Commonwealth Games, and she’s planning to impress at the Birmingham Games.

“I love coming back to Wales, especially being a home athlete, everyone seems to know me and I hear my name quite often in the crowd, it’s really good,” said Cockram.

“I didn’t really know what to expect in terms of position but I came here wanting to PB which I’ve done, and to win made it extra special. I love coming back to Wales, especially being a home athlete, everyone seems to know me and I hear my name quite often in the crowd, it’s really good.

“The Commonwealth Games have been my dream from a really young age so hopefully I can get selected for that now. It’s been my dream since I started running.”

It was a two-way battle for the men’s title but Kadar Omar came out on top after a lightning fast finish down King Edward VII Avenue. Omar had been part of a breakaway group alongside brothers Mahamed and Zakariya Mahamed, as the trio raced through 10K in 29:36. Mahamed Mahamed and Omar shook off the challenge of Zakariya as they raced through Cardiff Bay and headed for the north of the Welsh capital.

Omar built up a three second lead but waited until the final mile to up the pace and ensure he claimed victory after finishing second at the Cardiff Bay Run 10K in September. The refugee runner, who fled his home in Ethiopia to move to a refugee camp near Nairobi at the age of 13, beat Mahamed Mahamed by six seconds, while Zakariya Mahamed finished third in 1:04:05.

“My aim was to test myself with the best athletes and take the win, so I’m happy to take the win and I really enjoyed the course,” said Omar.

“I really enjoyed the atmosphere and support along the way, thanks to the Cardiff people, the organisers and my coach for training me for this Cardiff Half Marathon.

“I fled from my country when I was 13 because of the political situation and I ended up in a refugee camp with my uncle and brother. I lived there in a tent, life became very hard.

“But I found a home through sport, and sport changed my life. I am always running to forget what happened and to focus on improving. Running is my life and is very dear to me so I enjoyed today.”

The event also incorporated the Welsh Half Marathon Championships, which was won by Cockram and Cardiff AC’s James Hunt, who was the first Welsh male across the line in 1:06.06. Pontypridd Roadent Paul Graham (1:06.53) finished second and  Swansea Harrier Dan Rothwell (1:07.16).