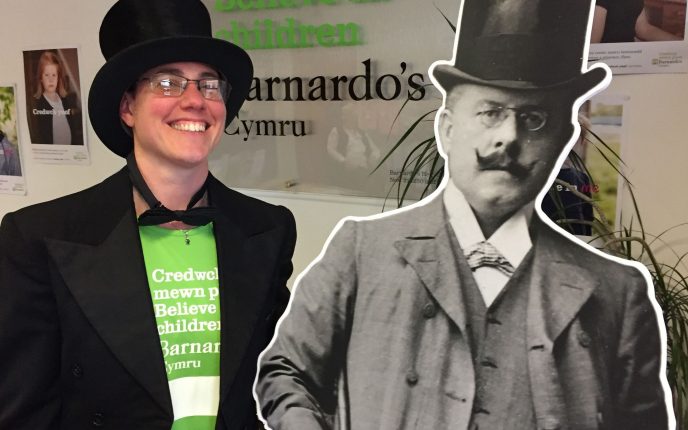 Dr Barnardo joins the runners for the Cardiff Half

More than 150 years after Dr Thomas Barnardo began helping Britain’s most vulnerable children his spirit will live on this weekend at Cardiff University Cardiff Half Marathon.

Because Sarah Crawley, current Welsh director of Barnardo’s, the charity he founded, will be dressed in top hat and tails just like those worn by the great man as she joins the 25,000 runners for the event.

And while most runners will be most concerned about dehydration, blisters and hitting the wall, Sarah’s mind will be on whether her costume is up to the challenge.

“I’ve chosen to run as Dr Barnardo as he was our charity’s founder and an inspiration but I am quite worried about overheating and chaffing. The top hat could keep falling off, the woollen tails get damp and heavy and I’m also concerned people will think I am Abraham Lincoln!

“I have done quite a few half marathons and wanted to do this one differently so I thought I would make it harder and challenge myself further,” said Sarah, Director of Barnardo’s Cymru.

She has a particular interest in Sunday’s event as Barnardo’s Cymru is the official charity partner and more than 400 runners will be raising money for the charity which helps thousands of vulnerable children and families in 84 services across Wales.

They range from support for children who have been bereaved or abused to care leavers, adoption and fostering and family support for families negatively affected by parents having been in the Armed Forces or in prison.

Sarah said: “I am so pleased to be running with, or quite possibly behind, runners raising money for Barnardo’s. I know they will have put in a lot of training. Some of them will be seasoned runners but for others this will be their first half marathon.

“I wish everyone the best of luck on the day and hopefully we will raise a considerable amount of money for vulnerable children, young people and families.”

You can sponsor Sarah through her Just Giving page https://www.justgiving.com/fundraising/sarahcrawley151