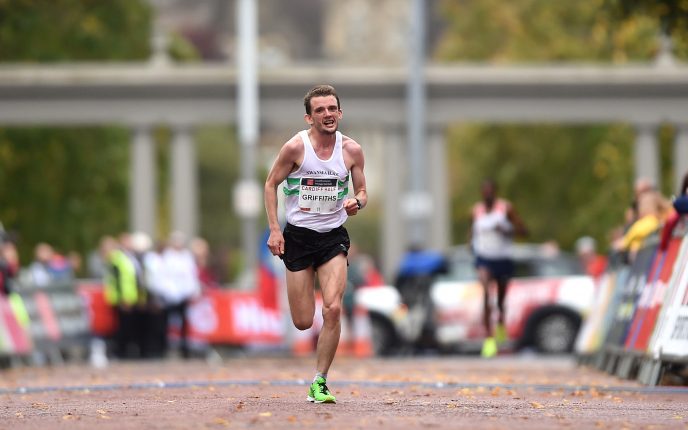 Dewi Griffiths followed up his lifetime best at the Cardiff University/Cardiff Half Marathon by running the fastest marathon by a Briton since Mo Farah’s debut in London in 2014 (2:08.21) as he finished fifth in his first trip over the 26.2 mile distance in Frankfurt.

But while the 26-year-old Swansea Harrier was pleased with his latest PB of an amazing 2017 he believes there is still more to come in the future. His time was a Commonwealth Games A stand for the Gold Coast next year and also qualified him for the British team for next year’s European Championships.

“I really think I could have run 2:08 because I got to 30K and I was flying. Then I started to cramp up a bit and I let a lot of time slip over the final 7K,” said Griffiths.

“As marathon debuts go, it ticked a lot of boxes and I’m excited about the future. I didn’t really know what to expect, but I feel pretty good and now I’ve got some big decisions to make for next year.”

One of those will be what event to run at the Commonwealth Games next year. He is now qualified for the 5,000, 10,000 and marathon and is the third Welshman to qualify for the marathon.

With the 10,000 metres coming the day before the marathon it won’t be possible to run those two events and it seems likely he will stick to the track events. That would leave him free to chase a gold medal at the European Championships back in Germany in Berlin next August.

“I’m still only 26, so there is plenty of time for the marathon. After what happened in Glasgow at the 2014 Commonwealth Games, when I was injured and couldn’t run properly in the 10,000, I really want to race the 10K in Australia for myself,” said Griffiths.

Griffiths rocketed to the top of the UK rankings this year, overhauling World Championship runner Callum Hawkins, who was fourth in London in 2:10:17, and was the fastest marathon debut of all-time by a Welsh athlete. Steve Jones only reached half-way in Chicago on his debut before breaking the world record the following year.

“The plan was to reach half-way in about 64:15, but we were ahead of that time. I settled into the second group behind the leading pack of African athletes,” said Griffiths.

“The wind was behind us in the second half and at about 27K I realised I had dropped everyone else in my group and I was running on my own. I think I ran a little bit within myself to 35K because I didn’t really know what to expect.

“Because I picked up a bit of cramp in the closing stages I don’t feel I ever really got into the red zone at the end of the race. I just feel I could have gone faster.”