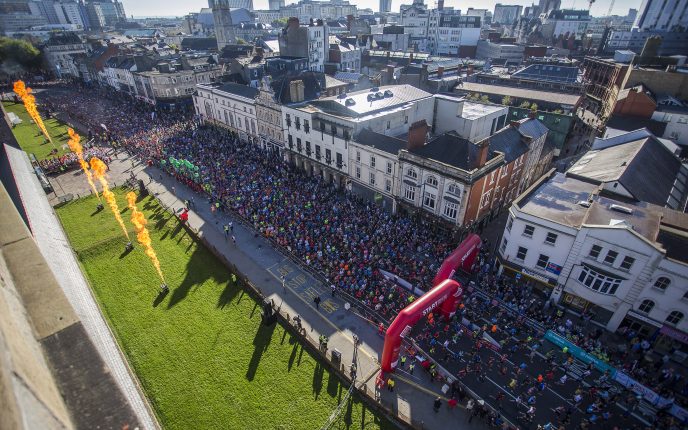 Course records were shattered as a record number of runners took to the streets of the capital for the 2016 Cardiff University/Cardiff Half Marathon.

In the elite race, Kenya’s Shadrack Korir and Violah Jepchumba broke the existing men’s and women’s course records, while more runners than ever before completed Wales’ biggest mass participation event.

Korir’s time of 60:54 was almost a minute quicker than the three-year-old course record of Loitarakwai Lenguirisi and in the women’s race Jepchumba stopped the clock at 68:14, taking close to three minutes off Susan Partridge’s record of 71:10 from 2012.

“It’s been another inspirational day. From the elite races and the two new course records to the mass race where more people took part than ever before.

“Once again we were blessed with fantastic weather and it was great to see so many tens of thousands of people out on the streets to support the runners.

“The exposure of live television coverage provides a huge boost to the race and also to the city, as people all over the UK and beyond get to see Cardiff at its very best.

“We strive to improve the event year-on-year and we are proud that all of the hard work has paid off and many thousands of people have enjoyed such a wonderful day.”

Wales’ leading distance runner Dewi Griffiths smashed his own personal best with a run of 63:26 to finish 9th overall and he believes the success of the Cardiff University/Cardiff Half Marathon is helping to put Wales on the map.

Griffiths said: “The conditions were lovely, the sun is out and Cardiff was at its best today. I saw the smiles on everyone’s faces as I came down the home straight, the support was amazing and the atmosphere was great.

“I got a big personal best so it’s a really happy day for me.

“Part of it is down to Steve (Jones), I’ve trained hard for the last couple of weeks and I’m becoming more mature. It’s nice to have Steve in my corner as a mentor after seeing what he did back in his day and I want to emulate him and beat his records.”

Official Cardiff University/Cardiff Half Marathon ambassador and former marathon world record holder Steve Jones said: “Dewi has been coming out to the USA for two-and-a-half years now and I’ve seen improvements in his performance and commitment.

“He’s matured, he’s going in the right direction and he listens. He doesn’t say a lot but he listens and he is a vital part of my group now.”

There was also a new world record as Cardiff’s Mike Kallenberg set the fastest half marathon time ever run while dressed as a superhero, finishing in an incredible 69:33 while dressed as Robin.

He was followed closely by friend Carwyn Jones dressed as Batman, with both runners raising money for Rob Bugden, who suffered serious injuries after a parachuting accident in Phoenix in January.

Great Britain international runner Mike said: “It was the hardest thing I have ever done, it was so warm!”

Carwyn added: “I am sure that Rob was watching on television and having a good laugh at us dressed like this but it’s all for a great cause.”

Runners were treated to near-perfect conditions, with glorious sunshine and only light winds as they attempted to complete the fast and flat course around Cardiff.

A whopping 17,110 crossed the start-line – a new event record – with several famous faces among them.

The former international rugby star said: “The start was bit exciting for the girls and a few of them got a bit carried away and went off a bit quicker than they should have.

“But whatever happened I was determined to get them all over the finish line.”

Among Alfie’s Angels was actress and star of Torchwood Eve Miles, she said: “It was the thought of fish and chips at the end that got me through it!”.

The event was once again supported by Arriva Trains Wales, Brooks Running (who provide the unique finishers t-shirts) and Brecon Carreg – the official water. Aldi UK partnered the event for the first time this year, providing each runner with a banana and chocolate bar at the finish line.

If you’ve been inspired by this year’s race you can now sign-up for next year’s event.

Entries for the 2017 Cardiff University/Cardiff Half Marathon on Sunday 1 October are now open via www.cardiffhalfmarathon.co.uk with early bird prices starting from £29.