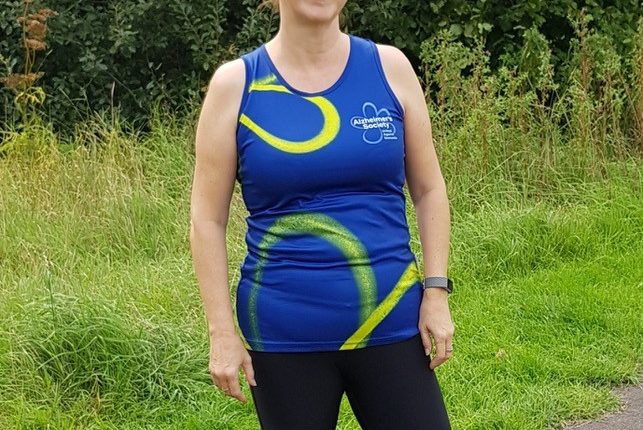 Christine inspired by memory of Mum

Christine Binding will have the image of her mother in her mind to drive her on through the 13.1 miles of the Cardiff University/Cardiff Half Marathon.

The Church Village runner is relishing the chance to take on the Cardiff Half in support of Alzheimer’s Society as they came to her aid after her mother Jean Jenkins’ Alzheimer’s diagnosis. Christine was due to run last year’s 15th anniversary edition but couldn’t face leaving her mother’s side as she battled with an extra diagnosis of vascular dementia before she passed in August last year.

But Christine is determined to be ready this time around to pay tribute to her mother whilst raising vital funds for Alzheimer’s Society.

“Mum was such an amazing woman,” she said. “Her diagnosis coincided with my 50th birthday, a time when you look at things in your life, and from that point I started running. I wanted to do it last year so badly. Mum would have really wanted me to do it.

“I was gutted I couldn’t do it last year. The nurses were telling me to bring my trainers to the hospital and run around Heath park but I just couldn’t leave mum.

“She was diagnosed about four years ago after we spotted something was up. I already had a bit of knowledge about symptoms, and garnered more knowledge from the Alzheimer’s Society website.

“The site has been massive for me and my family, it made life easier for us and some of the advice was really valuable.”

Christine is hoping to raise more than £300 to help Alzheimer’s Society continue their vital work to support individuals affected by Alzheimer’s and their families. Alzheimer’s Society is the only UK charity that campaigns for change, funds research to find a cure and supports people living with dementia today.

And for Christine, the diverse range of help she received was invaluable during Jean’s final days before she passed on August 28th last year.

“She loved seeing me run and she was there when I did a 10K in Treforest last May,” she added. “I was running towards her at the finish and it struck me how frail she had become. But it was something she was really proud of me doing and I was proud of her for being there as it was hard for her with her dementia at that time.

“That made me go back to the website and from there I got in contact with a group. Our Dementia

Support Worker Ruth Caddy put us in touch with other people also going through the same kind of experiences with Alzheimer’s. Through her we started going to talks and taking part in support groups.

“My mother didn’t follow what is considered to be the usual path of Alzheimer’s, which my family and I were prepared for after her diagnosis. The Alzheimer’s was slowly progressing but then after Christmas she went downhill really fast into a severe state and was finally admitted to hospital in June and diagnosed with Vascular Dementia as well as Alzheimer’s.

I can’t thank the Alzheimer’s Society enough for all the support we received “They were really good in helping out with things like advocacy and power of attorney but much simpler things as well like organising my Mum’s wardrobe so she could get herself ready in the mornings, because despite the Alzheimer’s she was still independent. I’m going to run, not just for my Mum but for so many of my friends’ parents who are living with this dreadful disease”

Natalie de Maid, Regional Fundraising Manager for Alzheimer’s Society Cymru, said: “It’s wonderful that Christine is running the Cardiff Half Marathon in honour of her mum. Every pound our amazing fundraisers raise helps us to campaign for change, fund research to find a cure and support people living with dementia today.

“There are 45,000 people living with dementia in Wales and that number is growing year on year. Alzheimer’s Society Cymru provides advice, support and guidance to anyone affected by dementia, no matter what your situation. We would like to take this opportunity to thank all the runners in the Cardiff Half Marathon raising money for Alzheimer’s Society and best of luck to anyone taking part!”