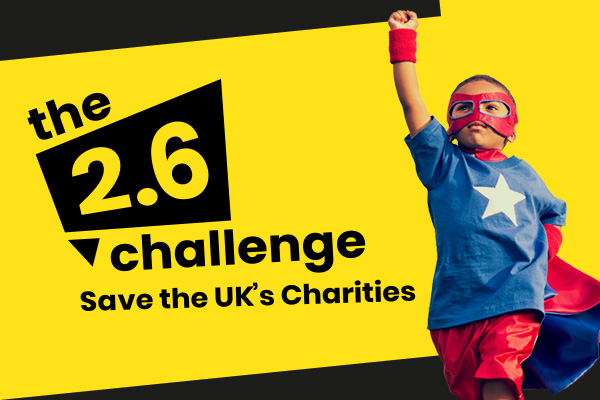 Celebrities And Sports Stars Back The 2.6 Challenge To Help Save The UK’s Charities

Celebrities, Olympians and sports stars are helping to rally the public to get behind The 2.6 Challenge campaign to help save the UK’s charities from Sunday 26 April.

Run 4 Wales, the event organisers behind the Cardiff University Cardiff Half Marathon, have teamed up with rrganisers of the country’s biggest mass participation sports events to create the campaign to help save the UK’s charities which are facing an estimated £4 billion shortfall.

With two days to go before The 2.6 Challenge officially begins on Sunday 26 April, fundraising has already broken the £1.5 million mark. Organisers expect that figure to grow rapidly from Sunday.

They’re calling on the public to join them in dreaming up an activity based around the numbers 2.6 or 26 and fundraise or donate to their chosen charity via twopointsixchallenge.co.uk. The 2.6 Challenge is open to anyone of any age – the only requirement is that the activity must follow the Government guidelines on exercise and social distancing.

The campaign is supported by the Charities Aid Foundation, the Institute of Fundraising, the Small Charities Coalition, Sport England, Sport Wales, sportscotland, Let’s Do This, Virgin Money Giving and JustGiving.

For more information on The 2.6 Challenge, visit twopointsixchallenge.co.uk and see below for a list of 2.6 Challenge highlights involving celebrities, sports stars and members of the public.

Former Welsh international rugby player and BBC pundit Jonathan Davies OBE is completing a 26-mile cycle each day for 10 days to support charity Velindre of which he is President. He has called out Real Madrid and Wales international footballer Gareth Bale who will be attempting 26 keepie-uppies, followed by a bicycle kick volley for his 2.6 Challenge on Sunday.

STARS STEP IN TO BAT FOR RUTH STRAUSS FOUNDATION

A group of 26 Olympic rowers led by multiple World Championship and Olympic gold medal winners Sir Matthew Pinsent CBE and Helen Glover and featuring Dame Katherine Grainger and Sir Steven Redgrave CBE, are taking on a rowing marathon relay with each completing 2.6km on the rowing machine, all whilst maintaining a maximum rate of 26.

Olympic cycling champion Joanna Rowsell was meant to be running the London Marathon on Sunday but is instead vowing to do as many squats as possible in 2.6 minutes for her chosen charity Alopecia UK.

Southampton Saints legend Franny Benali will be taking on a full marathon in his back garden this Sunday to support the Saints Foundation and NHS Charities Together. The former Saints defender will complete the marathon in around 717 laps of his backyard, despite limited training with his last run just four and a half miles long.

Muscular Dystrophy UK ambassador Martin Hywood is leading a team of 20 Leeds United fans in a challenge to climb the equivalent of Mount Snowdon, only from the comfort of their own homes. The team, including Kaiser Chiefs bassist Simon Rix plus Leeds United legends Ian Harte, Simon Grayson and Danny Mills, will attempt to climb 4,610 steps between them using the staircases in their homes.

WELSH RELAY TEAM RUNNING FOR PARENTS IN THE NHS

A group of young Welsh middle distance runners, coaches and parents are taking on a 2.6 mile virtual relay covering a combined total of almost 100 miles throughout Wales to raise money for the NHS Hospitals League of Friends. The group has purposely designed the route to pass four hospitals – Mold Community, Countess of Chester, Wrexham Maelor and Penley Community – as three of the runners have parents working in frontline jobs as a surgeon, a nurse and a doctor. The group is supported by former athlete and GB international runner and Brecon Carreg Cardiff Bay Run 2018 winner Charlie Hulson and have named their feat The Deeside AAC 2.6 Relay Challenge after their athletics club.

Welsh table tennis prodigy Anna Hursey, 13, is taking on a table tennis challenge to hit the most targets in 26 seconds to raise money for the NHS. Anna is currently ranked No. 1 in Wales for Under 15s and No. 2 for Seniors, as well as being the youngest athlete ever to compete in the Commonwealth Games at senior level – representing Wales at the Gold Coast in 2018 when she was just 11.

26-POUND BACKPACK CHALLENGE Support Our Paras charity supporter Ben Buxton will be attempting to climb his home staircase 866 times – a 26,000 stair climb – wearing a backpack weighing 26lbs. He estimates it to take between seven to eight hours to complete

Nine year old Melissa has chosen the quirky challenge of sitting in a bathtub of cornflakes for 2.6 hours on Sunday to support her mum who works as a nurse at Lindsey Lodge Hospice in Scunthorpe.

Fashion blogger and presenter Kelly Jade of London-based bridal boutique The Wedding Club and host of ‘The Kind, The Creative and The Chaotic’ podcast is this Friday hosting an Instagram live catwalk show where she’ll attempt to wear 26 outfits in 26mins to support refugee charity Choose Love.

Kelly will be setting out to complete the catwalk sprint with the support of her mum as her “backstage team”. She plans to split the outfits into themed categories for the show, drawing inspiration from RuPaul’s Drag Race.

Irish presenter, comedian and DJ Ryan Hand, 32, has pledged to run a marathon on the driveway of his apartment block in Kings Cross this Friday to support the charity Marie Curie. Ryan will be running in memory of his mum Pauline and aunty Eileen, both who died of ovarian cancer in 2008 and 2005.

Ryan will be setting out to complete the marathon in 800 laps of his driveway with a support crew consisting of his girlfriend and a handful of friendly neighbours who will offer refreshments as he goes along, maintaining social distance of course. He hopes to finish in under 4 hours, or by 6pm.