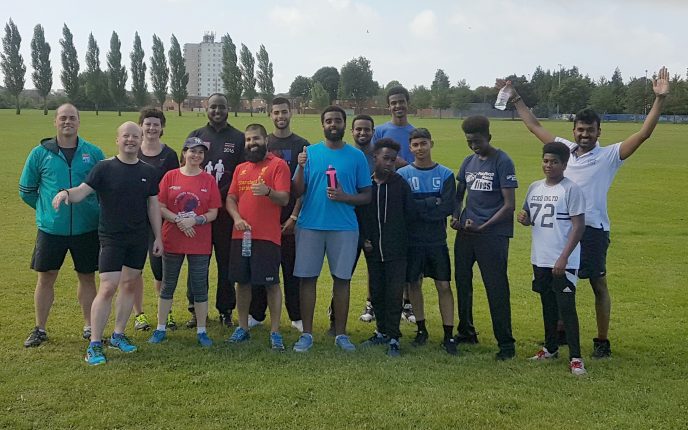 A new running group has been formed in Grangetown as a legacy of Cardiff University’s title sponsorship of the World Half Marathon Championships in Cardiff.

The Run Grangetown running group has been set up with the support of the University’s Community Gateway engagement project and includes first-time runners who took part in the World Half.

Now, the novice runners have set their sights on the Cardiff University-sponsored Cardiff Half Marathon on Sunday 2 October.

They held their first training session in August and further training runs are planned.

Ali Abdi, Community Gateway partnerships manager and a member of Run Grangetown, said: “We’re all novice runners and while we’re not likely to trouble the Olympic Games just yet, we’re an enthusiastic bunch.

“After running the World Half, many of us wanted to keep the momentum going so we entered the Cardiff Half too.

“The new running group will encourage us to run regularly and train with fellow novices. It’s fun, sociable and helps us all to keep fit.”

Each session is supported by Community Gateway, School of Healthcare Sciences, Run Wales and Cardiff Volunteering, with a group leader co-ordinating the activity.

While Community Gateway has initially helped Run Grangetown get off the ground, the aim is for the runners themselves to take it over.

Community Gateway is funding two places on a Leadership in Running Fitness (LiRF) course that will provide a leader with the skills to deliver fun and safe sessions to multi-ability groups.

Leaders will be equipped to provide advice and support to new runners, as well as to develop pathways for those who want to progress.

Jemma White, who is taking a place on the LiRF course, has entered the Cardiff University/Cardiff Half Marathon and wants to encourage others to enjoy running.

Jemma said: “I’m excited to be completing the LiRF certificate so that I can help the group get established and support people to get out there and run, no matter what their goal is.

“After completing the World Half Marathon in March via Community Gateway, my next goal is a trail 10km race and then the Cardiff Half in October.

“I’m sure Run Grangetown will help me beat my target time!”

Community Gateway is one of the University’s five flagship engagement projects, otherwise known as its Transforming Communities programme.

The University is working with Welsh Government and communities in Cardiff, Wales and beyond in areas including health, education and wellbeing.