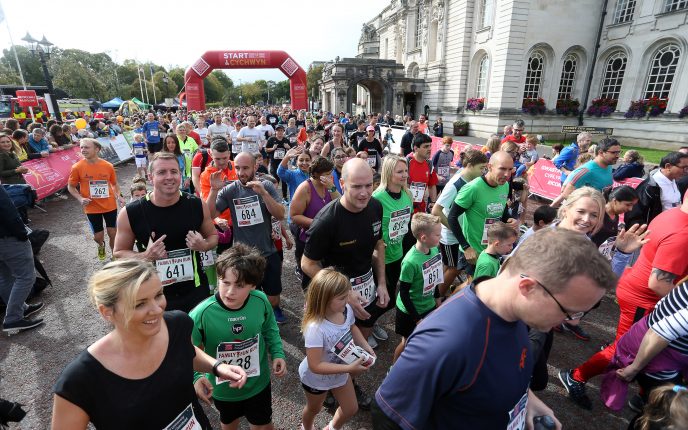 A pair of new world record holders were crowned as around 2,500 runners of all ages and abilities got a taste for the Cardiff Half Marathon experience. South Wales firefighters Kevin Summerhayes and Ellie Hathaway got their names in the famous Guinness Book of World Records in the Come and Try Open Mile race.

Summerhayes knew he had to dip under 6 minutes 8 seconds wearing his full-fire kit to secure a new record, but he blew it out the water to come home in 5:57. Hathaway had too break the 11 minute mark, and she managed to haul herself over the line with just over a minute to spare. Another eight firemen and women will attempt records tomorrow alongside 25,000 elite and amateur runners.

“It’s an amazing feeling, I got halfway around and thought I was going to have to stop but I pushed through that sticky bit, and now I can’t believe it, I feel on top of the world,” said Summerhayes.

“I can’t believe I actually did it, it’s a great start to the weekend. We’re hoping to get 10 new records across the weekend and it’s great to get two in the bag is great, we can look forward to the Cardiff Half now.”
A host of the world’s elite runners, including last year’s champions Shadrack Kimining and Viola Jepchumba came to watch more than a thousand Family Fun Runners bring a sea of colour to proceedings while they completed a 2.4km route around the iconic Civic Centre to set the Cardiff Half weekend off with a bang.

The fastest Under 11s and Under 13s in Wales set the pace at the start of the day in the Welsh One Mile Championships before 300 Cardiff University Students took part in the Cardiff University Student Life Fun Run.
Another record fell in the Senior Men’s Welsh Mile Road Race as Tom Marshall stormed to victory to beat his trainer James Thie’s record by a single second. His time of 6:15 was good enough to see off the challenges of Jonathan Tobin and Ieaun Thomas.

Then it was the turn of the youngest runners in town to take the spot-light in the popular Toddler Dash before some of Wales’ most recognisable mascots battled-it-out. The honours were shared by the Nando’s Chicken and D-Dog from Kidney Wales after a photo finish.
Isobel Parry-Jones of Cwmbran Harriers was crowned Welsh Women’s Under-20 Champion as she dominated the junior and senior category to come home in 5:19 to raise the curtain on what promises to be another unforgettable weekend in the Welsh capital.