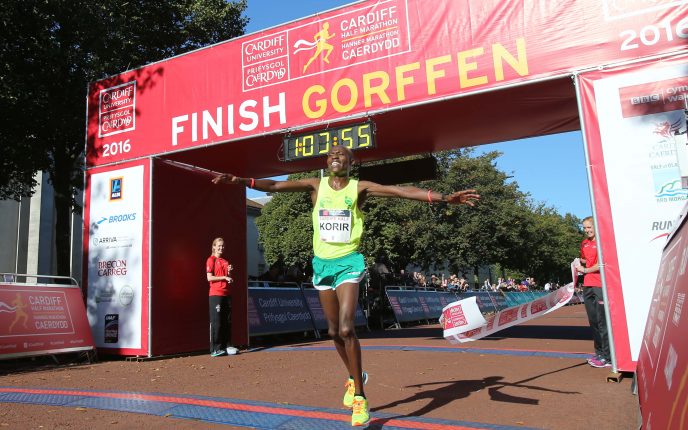 Kenya can point to a new rising star on the roads after unknown Shadrack Korir broke clear of Paris Marathon champion Cybrian Kotut to win the Cardiff University Cardiff Half Marathon in a race record time of 60:54.

Running on virtually the same course as used by the IAAF for the World Half Marathon Championships in the Welsh capital in March, Korir went almost two minutes quicker than ever before to lead home a Kenyan 1-2-3.

Not much was known about 20-year-old Korir before the race. He had some form over the country and a half-marathon best of 62:40 from Eldoret earlier this year, but he showed he has some real talent in his first race outside Kenya.

Cybrian Kotut determined the early pace and was true to his word in ensuring there was an event record (61:51 by Loitarakwai Lengurisi in 2013) but found the unusual, weaving style of Korir a bit hot to handle over the final few miles.

Charles Mneria, who ran over 5,000 metres at the Rio Olympics, picked up third place with his finishing time of  61:36 as the medallists all got home under the old record. Former champion Ben Siwa was fourth in 61:57.

The Kenyan dominance of the event continued in the women’s race, where the world’s most promising road racer, Viola Jepchumba, led the field home in a race record time of 68:13. Sue Partridge’s 2012 time of 71:10 was blown apart as Viola ran a solo time that would have earned her fifth place in the world championships.

“I wanted to make sure there was a course record and we had a good group from the start. Had we had pacemakers, then the time would have been much quicker because this is a very fast course,” said Kotut.

“Shadrack ran strong at the end and just managed to break clear of me. He did really well and I couldn’t hold onto him in the closing few miles.

“The weather was fantastic, there were big crowds out on the course and I think we turned it into a good race in the end. I’ll be back next year to run even faster, especially if they can get some pacemakers involved.”

The rise and rise of Dewi Griffiths was further underlined as the Swansea Harrier stripped 45 seconds off his previous best to finish eighth. It was a performance that crowned a wonderful year for the 25-year-old, who has competed for GB at the World Half Marathon Championships, European Cross-Country Championships and European Athletics Championships.

His advance in recent years is best illustrated by the fact that three years ago he ran exactly 65 minutes. He clocked 64:27 last year and 64:10 in the world championships.

“I had a few target athletes around me and one of them decided to go with the main group, so I stuck in with them. I probably went too fast at the start and I felt a bit tired at eight miles,” admitted Griffiths.

“But things picked up at 10 miles and I had a second wind and finished strongly. I think that is down to the extra mileage I’ve been doing in training.

“I’m pleased to have broken 64 minutes at last, but I still think there is more to come. It’s just a case of putting it all together on the right day.

“I’ve got the Six Stage Road Relays to look forward to this weekend and I really want to target the Euro Cross Championships. Then it will be on to the Commonwealth Games, hopefully, in 2018.”

Irish Olympian Paul Pollock was 10th in 65:54 and the first British female home was Rachel Fenton (Shaftesbury Barnet) in fifth place in 74:03.

Entries for the 2017 Cardiff University/Cardiff Half Marathon on Sunday 1 October are now open via www.cardiffhalfmarathon.co.uk with early bird prices starting from £29.