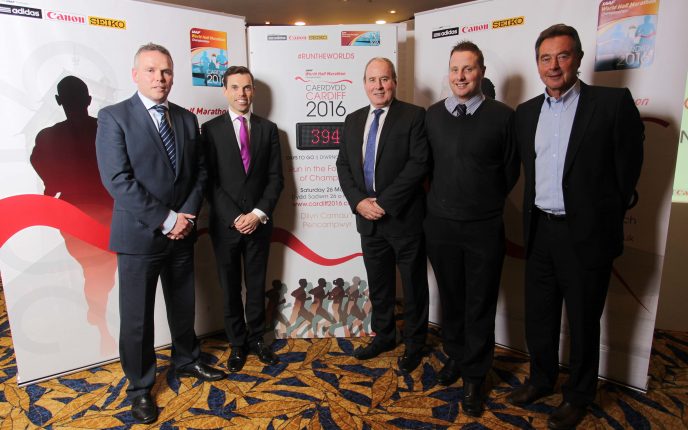 CARDIFF INVITES THE WORLD TO RUN IN THE FOOTSTEPS OF CHAMPIONS

The world’s elite distance runners will be converging on Cardiff on Easter Saturday, 26th March 2016, to take part in the 22nd edition of the IAAF World Half Marathon Championships, Cardiff 2016.

While the race will be an important stepping-stone for many of the athletes towards the Olympic Games marathon in Rio 147 days later, it will also offer 25,000 runners of all ages and abilities the chance to compete in a mass participation race along the fast, flat and iconic course around the Welsh capital.

The event organisers are today (26th February) formally inviting runners from around the world to register their interest to take part in the biggest athletics event to be staged in Wales since the Commonwealth Games in 1958.

From today runners will get the chance to claim one of the 25,000 places in the event by registering their details. Everyone who pre-registers will then get the chance to be first to apply for a race number when entries open officially on 26 March – a year to go to the actual race. Those who pre-register will be given a day to apply all on their own before the event is opened up to the masses.

This is how you can register your interest:

“It is fantastic that Cardiff will be hosting a World Championship event of this stature in 2016. The Cardiff Half Marathon has already proved itself to be one of the biggest and best road races in the UK and when the best athletes in the world run on the same course the times should be spectacular.

“But the real beauty of this event is that ordinary runners get the chance to line-up on the same start line as the best athletes in the world. That simply doesn’t happen in many other sports.

“This is a major coup for British and Welsh athletics and should give our home grown talent the chance to shine on their own doorstep.”

It will be the fourth time the IAAF World Half Marathon Championships has been staged in the UK. The inaugural event was staged in the North East at the Great North Run in 1992, Bristol hosted the event in 2001 and Birmingham in 2009. No British male athlete has won the title, but Liz McColgan (1992) and Paula Radcliffe (2000, 2001, 2003) have captured four titles between them for British women.

“It’s was a huge honour for Wales to win the right to host the IAAF World Half Marathon Championships and one which is testament to the nation’s enviable credentials in hosting successful global sporting events, such as Ashes Test, Ryder Cup, Rugby World Cup, UEFA Super Cup and many others.

“The success of the Cardiff Half Marathon was also an important contributing factor in the success of the bid.  We look forward to working with partners to deliver a world class event in 2016 – for both the elite runners and everyone else who will join this amazing opportunity.”

There were 30,000 entries for the 2014 IAAF World Half Marathon in Copenhagen and more than $245,000 available in prize money for the top athletes. The men’s race was won by Kenya’s Geoffrey Kamworor in a time of 59:08, while the women’s title went to another Kenyan, Gladys Kerono in 67:29.

“Staging the IAAF World Half Marathon Championships, Cardiff 2016 on Easter Saturday next year is huge for our City regions, building on the success of the well-established Cardiff Half Marathon and we are proud to be the host city for this prestigious event.

“With its iconic route around the city, the event will be broadcast live on the BBC UK-wide, and beamed to another 65 countries around the world, a perfect way to showcase our Capital City.

“Following the best runners from around the world, there will be 25,000 running in the mass participation event, supported by over 100,000 of our citizens who will be enjoying the carnival atmosphere around the route.

“I would also like to thank Welsh Government, Cardiff Council, Welsh Athletics and all the volunteers that make this event possible.”

The official IAAF Partners for the 2016 World Half Marathon Championships are adidas, Canon and SEIKO.

*Florence Kiplagat improved on her own World Half-Marathon record at the Mitja Marató de Barcelona on Sunday, 15 February as she won in 65:09, shaving three seconds off her previous world mark set in the same race a year earlier.