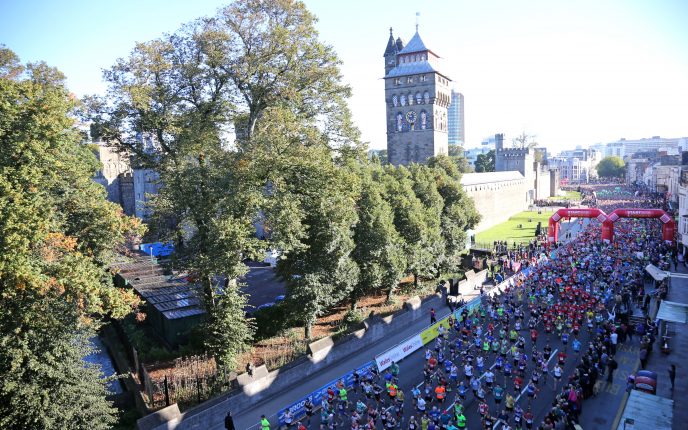 The 2017 Cardiff University/Cardiff Half Marathon will not only be the biggest ever, but the greenest too.

Run 4 Wales, the company behind the country’s largest mass-participation event are delighted to confirm that Recycle for Wales have come on board as an official Strategic Partner, sharing the joint objective of making the Cardiff University/Cardiff Half Marathon as sustainable as possible.

Recycle for Wales will once again launch a Run Refuel Recycle campaign, supported by Run 4 Wales and Cardiff Half water partner Brecon Carreg, informing runners about their recycling habits.

The Cardiff Half also takes place on the final day of this year’s National Recycling Week. Both events are in their 14th year, as local authorities look to boost awareness of what recycled material can produce.

Cardiff will welcome a record 25,000 participants to the city centre on October 1st and this year the ‘Run Refuel Recycle’ campaign is aiming to build on the efforts of previous races to recycle more empty water bottles than before. In fact, if every runner recycled just one 500ml water bottle it would save enough energy to power Cardiff Castle – just one of the iconic attractions along the 13 mile course – for 55 hours!

Wales is the World’s third best recycling nation, second best in Europe and is leading the way in the UK after recently hitting record recycling rate of 64%, and the Cardiff Half is committed contributing to this fantastic performance. Recycling facilities have been improved for the 2017 race and a team of ‘environmental champions’ have been recruited to help people recycle better at the event. Brecon Carreg have also listened to the feedback of runners and made the water bottles much smaller.

Matt Newman, Run4Wales CEO, said: “As Wales’ largest mass-participation event, we want to continue to raise awareness and set the standard for recycling at this year’s race. With 25,000 runners set to take-on the 13.1 mile course, we are hoping to recycle a record number of bottles and banana peels. Our army of ‘environmental champions’ will be on-hand to make sure water bottles and banana peels find their way into our recycling bins.”

Angela Spiteri, from Recycle for Wales, said: “We are proud that Wales is one of the top three recycling nations, but we want Wales to be number one. This is why we are encouraging runners and spectators to do that little bit more at the event and at home to help Wales become the world’s champion recycler. Recycling just one more thing can have a big impact, for example recycling one banana peel generates enough energy to charge two smartphones. That’s amazing!”

Jenna Bissell, Marketing Manager for Brecon Carreg said, “We’re thrilled to be involved with the campaign once again. While we do our best to ensure all of our bottles are recycled at the running events we work with, getting the spectators and environmental champions involved in a fun and informative way will highlight the need to recycle as much as we can.”

Recycle for Wales, a Welsh Government grant-funded campaign, to encourage and help households in Wales recycle as much as possible. It is delivered by WRAP Cymru, part of not-for-profit WRAP, which works with governments, businesses and citizens to create a world in which we source and use resources sustainably. This campaign comes at the end of Recycle for Wales’ fourteenth annual Recycle Week, which aims to show people the direct benefits they can see from recycling.

For more information about the Run Refuel Recycle campaign, head to www.runrefuelrecycle.org.uk