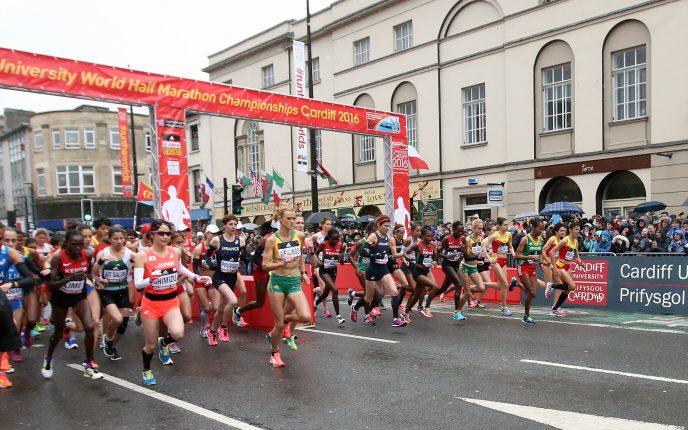 A record number of runners are set to take part in the Cardiff University/Cardiff Half Marathon on Sunday 2 October.

Close to 22,000 people have signed-up to run Wales’ biggest half marathon, with more than 2,000 registering in the final 48 hours before the entry deadline.

With several other races also taking place the day before the showpiece half marathon as part of the Festival of Running, including the Family Fun Run and Cardiff University Student Life Fun Run, close to 25,000 adults and children will participate in events over the entire weekend.

It confirms Cardiff’s place as the UK’s second-biggest half marathon and the third-largest road race behind the Great North Run and the London Marathon.

“With such strong competition from so many races across the UK, Run 4 Wales is delighted to be able to announce record entry figures for this year’s Cardiff University/Cardiff Half Marathon.

“We were eager to build on the phenomenal success of the IAAF/Cardiff University World Half Marathon Championships and there’s no doubt March’s event has taken the profile of the Cardiff Half Marathon to another level.

“More than half of this year’s runners will be taking on the challenge of the Cardiff University/Cardiff Half Marathon for the first time, which is testament to the event’s excellent reputation among the running community.

“Run 4 Wales prides itself on delivering not only the second-biggest half marathon in the UK but also one of the very best for value for money and event experience.

“We’ve also assembled the best elite field in the race’s history and are confident we will see new event records in both the men’s and women’s competitions.”

This year’s event is the first to be sponsored by Cardiff University, who continue their support following their successful partnership with Run 4 Wales for March’s IAAF/World Half Marathon Championships.

There is also a new start time of 10am, moved forward from 9am in previous years, with live coverage of the event on BBC Wales television and radio.

A brand new race on Saturday 1 October, The Cardiff University Student Life Fun Run, will see up to 1,500 students completing a 2.4km route around the university’s main building in the Civic Centre to help promote a healthy lifestyle among students.

The event is once again supported by Arriva Trains Wales, Brooks Running UK, who produce the unique finishers’ t-shirts, Brecon Carreg remain the official water supplier and award-winning supermarket Aldi is partnering the event for the first time.