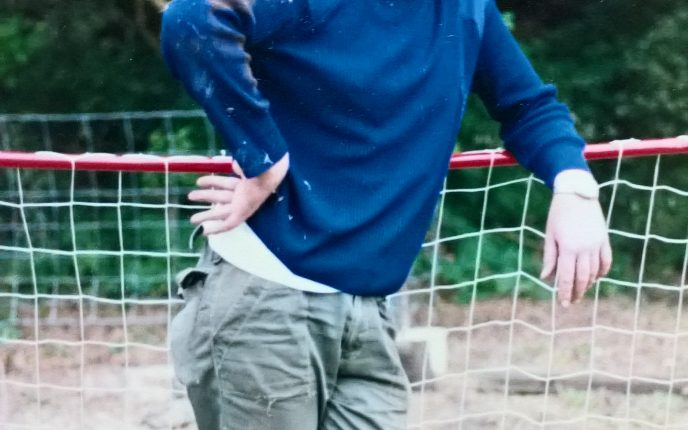 Keith Hayward will ensure his best friend’s legacy lives on 30 years after his death by running for Cancer Research UK at this year’s sold-out Cardiff University/Cardiff Half Marathon.

Keith and David bonded over their shared passion for sport and became inseparable through their teenage years. Their friendship continued into adult life, before a routine trip to the GP to assess a groin injury changed his life forever.

By the time David was diagnosed with testicular cancer at the age of 28, it had already spread to his stomach. Even during his darkest moments battling cancer, he inspired other patients with his infectious optimism.

He eventually lost his own battle, but Keith is making sure his memory lives on by helping Cancer Research UK find a cure for cancer. Keith has already raised £500 ahead of race day on October 7, and hopes to give as much as possible to help find a cure.

He said: “David and I grew up together. We went to the same schools, joined the same sports teams, and were closer than some brothers. He is without doubt the most successful and inspiring person I have ever met – in a short life he achieved so much. Through everything, David never once complained – many people say this but this time around it is completely true.

“He just got on with everything with a smile on his face. His character was so infectious, that when he was in hospital his nurses would ask him if he could speak to new cancer patients to help them come to terms with their illness.

“When David died, his mother asked for all donations to be to Cancer Research UK, and so that’s what we’ve all continued to do.”

The Cardiff Half has sold out for a second year in a row after 25,000 runners rushed to secure their place on the start line outside the iconic Cardiff Castle. But runners inspired by stories like David’s can still sign up by pledging to raise money for world’s leading cancer charity.

Keith has fought his own demons during the build up to race day on October 7, but the thought of David has spurred him on to take-on his biggest running challenge of his life.

He added: “Following a heart scare and kidney surgery that took me ‘out of the game’ for three months, I signed up for the Cardiff University/Cardiff Half Marathon. I do run quite a bit, but the furthest I’ve run before is around 9km, so this feels like a big step up.

“Even though he’s been gone for almost 30 years now, David remains my biggest motivation. If he was here, I know that he’d be at every point in the road where I faulted, shouting at me to go on. Because of him and his influence on my life, this really matters.”

To support Cancer Research UK at the Cardiff Half Marathon, sign up for a charity place or request a fundraising pack here: cruk.org/cardiff-half.

Already got a place? It’s not too late to set up a fundraising page with Just Giving.

For further information about Cancer Research UK’s work or to find out how to support the charity, please call 0300 123 1022 or visit www.cancerresearchuk.org. Follow us on Twitter and Facebook.