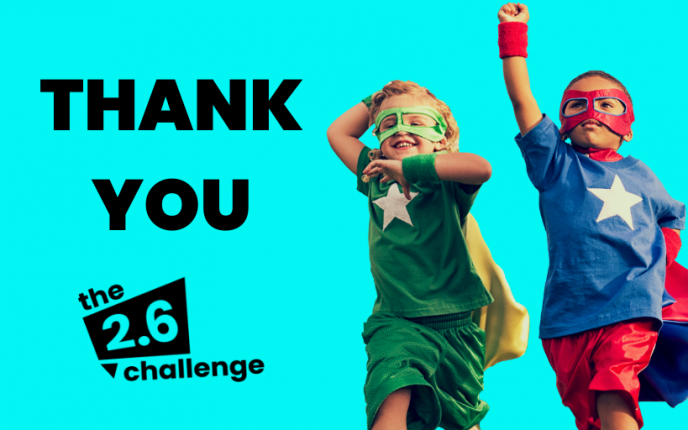 British Spirit Shines Through With Massive Support For The 2.6 Challenge To Help Save UK Charities

Last weekend saw thousands of people of all ages take to social media to share their weird and wonderful fundraising feats.

In a bid to save the UK charities from losing out on vital funds gained from mass participation events which have been postponed, people from across the country have joined The 2.6 Challenge to raise a whopping £9 million so far for the UK’s charities.

Run 4 Wales teamed up with some of the country’s biggest mass participation sport event organisers to create the campaign to help save the UK’s charities which are facing an estimated £4 billion shortfall.

Hugh Brasher, Co-Chair of Mass Participation Sports Organisers (MSO) group and Event Director of London Marathon Events, said, “The response we have had to The 2.6 Challenge today has been incredible. It has been so inspiring to see the nation come together – from superstar celebrities to young children – to help save the UK’s charities.

“The best of Great Britain’s society shines through whenever we have our backs to the wall. People have been in their houses now for over a month and I think many of us feel helpless. While we understand the necessity to stay at home to save the NHS, many of us want to do something additional to help those in greatest need and The 2.6 Challenge allows us to do that, to get active and to help save the UK’s charities. It’s important to say that today was just the start of the campaign and we want to encourage people that haven’t already taken part to think of a challenge and give it a go.”

To take part you can simply dream up an activity based around the numbers 2.6 or 26 and fundraise or donate to your chosen charity via twopointsixchallenge.co.uk.  The 2.6 Challenge is open to anyone of any age – the only requirement is that the activity must follow the Government guidelines on exercise and social distancing.

The campaign is supported by the Charities Aid Foundation, the Institute of Fundraising, the Small Charities Coalition, Sport England, Sport Wales, sportscotland, Let’s Do This, Virgin Money Giving and JustGiving.

For more information on The 2.6 Challenge, visit twopointsixchallenge.co.uk and see below for a list of 2.6 Challenge highlights from today.

Lord Sebastien Coe set himself the unenviable target of taking on five 2.6 challenges for Greenhouse Sports.

He was joined by Wales and Real Madrid superstar, who in typical Bale fashion, knocked up 25 keepie ups and rounded it off with an overhead kick.

Twelve of Britain’s best female marathon runners ran 2.6 miles each this morning for The 2.6 Challenge, raising money for the mental health charity Mind. The challenge was the brainchild of Dr Eleanor Davis who, after running her 2.6 miles went to work on the Covid-19 ward at Stepping Hill Hospital in Stockport. Olympic hopeful Davis was one of 10 of the athletes in the challenge who should have been lining up on the Start Line of the Virgin Money London Marathon today looking to win places on the Great Britain team for the Olympics. The other 11 marathoners were Steph Twell, Alice Wright, Steph Davis, Eleanor Davis, Alyson Dixon, Helen Davies, Natasha Cockram, Rebecca Murray, Hayley Carruthers, Jess Piasecki, Tish Jones and Jo Pavey.

Eight year old Charlotte Miles has done 26 jumps on her pogo stick for the @_SmallestThings charity to raise awareness of premature births.

Callum Gillespie from Gloucester has completed 26 basketball challenges to raise nearly £100 in aid of @glosdeaf, who have supported him since he lost his hearing after contracting bacterial meningitis in 2014.

Pippa Steel from Gloucestershire has captured a unicorn and ridden it 26.2 feet to the rainbow, to raise money for the girl guides.

Daphne Kats Is spinning for 26 seconds for the @WCRF_UK World Cancer Research Fund.

Former rugby player and mum of two Dani Watts of Wokingham walked 26 steps to raise money for the England RFU’s Injured Players Foundation @rugbycharity. She suffered a life-changing spinal injury during a game for Rams RFC in 2017. Dani wore the race number she was meant to wear in the London Marathon wheelchair race.

Carrie McNab is completing 260 burpees in a Nicholas Cage face mask for Equation Org, who support victims of domestic abuse.

Kerry Bambrick-Sattar from Burton-on-Trent has completed her own local version of the Virgin Money London Marathon in aid of Oxfam.

Young Henry Edwards of Miskin today completed his final run, bringing his total to a marathon 26 miles – 2.6 miles a day for 10 days. Henry ran in support of Wish Upon A Star, a charity that has supported his cousin’s family after he passed away at just three-years-old. The charity provides immediate and ongoing support to bereaved parents and their families.